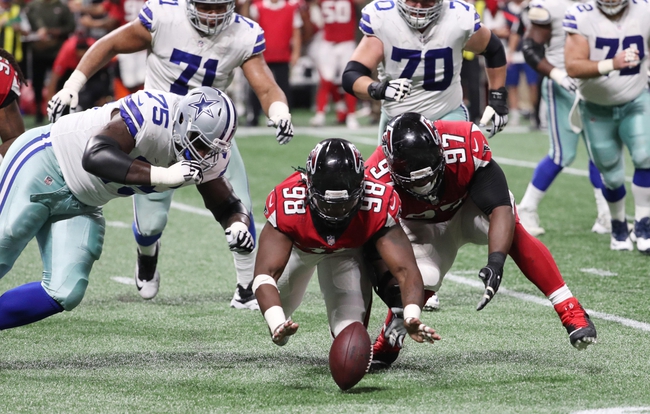 The Dallas Cowboys and the Atlanta Falcons will be matching up at Mercedes-Benz Stadium on Sunday in NFL action.

Dallas comes into this one at 4-5 on the year. The Cowboys have fallen to the Panthers, Seahawks, Texans, Redskins and Titans, and otherwise beaten the Giants, Lions, Jags and Eagles.

In the Philly game, Cowboys QB Dak Prescott put up 270 yards and one TD (and another on the ground), and Ezekiel Elliot led the rush on 151 yards and a score. Tops in receiving for Dallas was Amari Cooper with 75 yards on six grabs.

Over on the Falcons’ side, they’re 4-5 this year as well. Atlanta has taken out the Panthers, Bucs, Giants and Redskins, but fallen to the Eagles, Saints, Bengals, Steelers and Browns.

In the Cleveland game, Falcons QB Matt Ryan put up 330 yards and two scores, and Tevin Coleman led the rush on 44 yards. Julio Jones led the receivers for Atlanta on 107 yards and a score from seven catches.

Does Dallas have a shot at the division? Well, that depends on which week it is. It’s certainly within the realm of possibility, though. The Cowboys are coming off a big win over the Eagles on national television, so they’ll come into this one flying high.

As for the Falcons, their three-game win streak was trashed against Cleveland, but they’re certainly capable of bouncing back here.

I’m not quite a believer in the Cowboys just yet, so I’m taking Atlanta here--though if the line inflates anymore I'll probably change my mind.