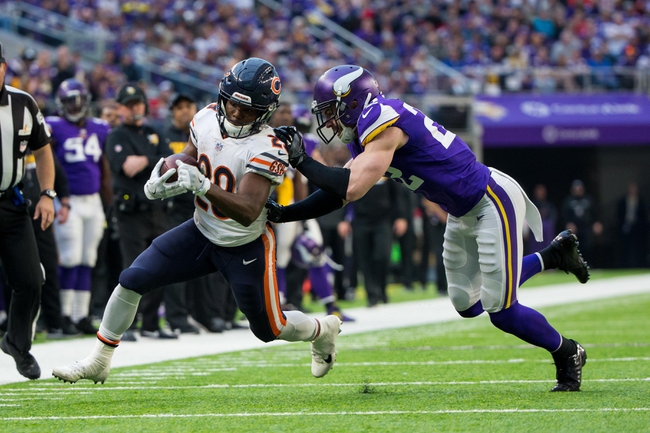 The Minnesota Vikings and the Chicago Bears will match up in an NFC North rivalry game on the NFL’s “Sunday Night Football” from Soldier Field.

Minnesota enters this one with a 5-3-1 record overall. The Vikings tied the Packers and lost to the Bills, Rams and Saints, but otherwise have taken out the 49ers, Eagles, Cardinals, Jets and Lions.

In the Detroit game, Vikings QB Kirk Cousins logged 164 yards, a TD and a pick while Dalvin Cook managed 89 yards on 10 totes. Tops in receiving was Laquon Treadwell with two grabs for 37 yards.

Over on the Bears’ side, they’re 6-3 right now. Chicago’s losses have come to the Packers, Patriots and Dolphins, but they’ve bagged wins over the Seahawks, Cardinals, Bucs, Jets, Bills and Lions.

In the Lions game, Chicago QB Mitch Trubisky put up 355 yards and three scores, and Jordan Howard led the rush on 21 yards. Allen Robinson was the top man in the Chicago receiving game with his 133 yards and two TDs from six grabs.

The Vikings’ offensive numbers from the Lions game don’t look all that impressive on paper, but they did a good job of spreading the ball around, with six guys getting multiple catches. Minnesota has now won four of their last five.

As for the Bears, they seem to be hitting the stride everyone predicted they’d have early in the season, and with their three-game win streak they’re shaping up to be one of the tougher teams in the conference.

This should be an interesting game as usual, and I think the Bears will take it.