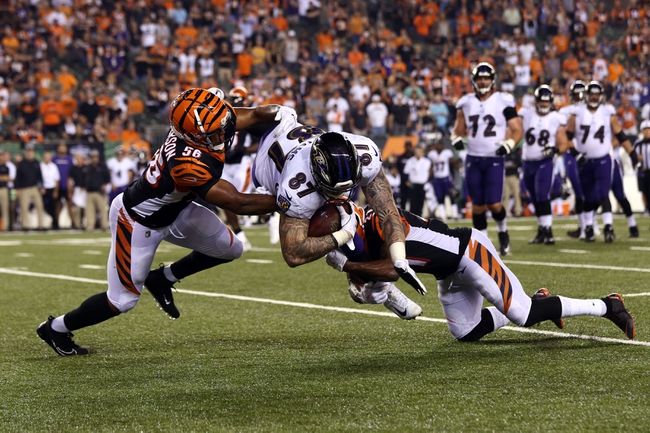 The Cincinnati Bengals and the Baltimore Ravens meet in a week 11 AFC North division tilt from M&T Bank Stadium on Sunday afternoon.

The Cincinnati Bengals will look to bounce back after being on the wrong end of a 51-14 rout at the hands of the New Orleans Saints in their last outing. Andy Dalton has thrown for 2,255 yards, 18 touchdowns and 10 interceptions on 63.1% passing, while Joe Mixon has rushed for 570 yards and 4 touchdowns this season. A.J. Green leads the Bengals with 687 receiving yards with 6 touchdowns while Tyler Boyd has a team-high 52 catches for 685 yards and 5 touchdowns this season. Defensively, Carlos Dunlap has a team-high 7 sacks while Jessie Bates III leads the Bengals with 45 tackles this season. As a team, Cincinnati is averaging 337.6 yards of total offense and 26.1 points per game this season.

The Baltimore Ravens will look for a win to get back to .500 after losing 3 straight and 4 of their last 5 games following a 23-16 loss to Pittsburgh in their last outing. Joe Flacco has thrown for 2,465 yards, 12 touchdowns and 6 interceptions on 61.2% passing while Alex Collins leads Baltimore in rushing with 393 rushing yards and 6 touchdowns this season. John Brown leads Baltimore’s receiving corps with 601 receiving yards and 4 touchdowns, while Michael Crabtree has 472 receiving yards and Willie Snead IV has a team-high 45 catches for 448 yards this season. Defensively, Terrell Suggs and Za’Darius Smith are tied for the team-lead with 5.5 sacks while Eric Weddle leads the Ravens with 39 tackles this season. As a team, Baltimore is averaging 366.6 yards of total offense and 23.7 points per game this season. The Ravens have also been one of the best in the NFL defensively, sitting top-3 in terms of total yardage against (305 YPG/2nd in NFL), passing yardage against (205.2 YPG/3rd) and scoring defense (17.8 PPG/2nd) this season.

Neither of these two are teams I want to back right now, but I really don’t feel comfortable siding with Baltimore, especially if Lamar Jackson is getting the start at QB. Cincinnati have had their issues this season, but they’ve had a lot of success ATS in this matchup and all 4 of their losses have come to playoff-caliber teams (Carolina, Pittsburgh, Kansas City and New Orleans). I think the Bengals can more than keep this one close if not win outright, so I’ll take the points with Cincinnati here.