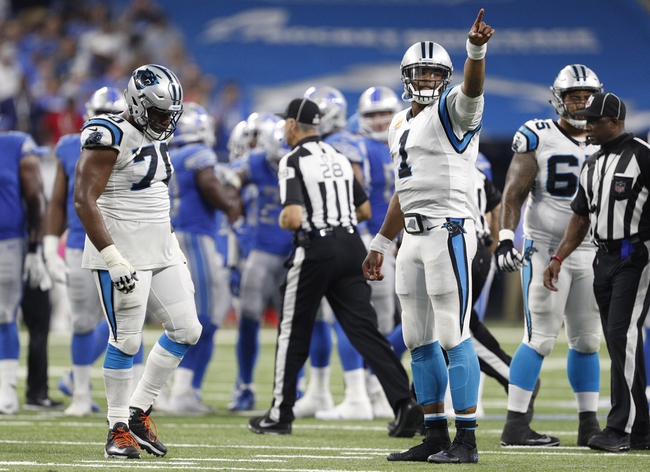 The Carolina Panthers and the Detroit Lions meet in week 11 NFL action from Ford Field on Sunday afternoon.

The Carolina Panthers will be looking to rebound after having their 3 game winning streak snapped thanks to a 52-21 rout at the hands of Pittsburgh in their last outing. Cam Newton has thrown for 2,086 yards, 17 touchdowns and 5 interceptions on 68.5% passing while Christian McCaffrey has rushed for a team-high 579 yards and 4 touchdowns. McCaffrey has also caught a team-high 54 passes for 439 yards and 4 TDs while Devin Funchess leads the Panthers with 477 receiving yards and 3 touchdowns this season. Defensively, Mario Addison leads Carolina with 7.5 sacks while Luke Kuechly is the Panthers’ leading tackler with 57 tackles this season. As a team, Carolina is averaging 357.2 yards of total offense, including the 3rd-most rushing yards per game in the league with 138.4 yards per game in addition to 26.8 points per game this season.

The Detroit Lions are in dire need of a win to snap a 3 game losing streak after falling to Chicago by a final score of 34-22 in their last outing. Matthew Stafford has thrown for 2,385 yards, 16 touchdowns and 8 interceptions on 66.8% passing while Kerryon Johnson has rushed for a Lions-leading 554 yards on the ground this season. Kenny Golladay leads the Lions with 39 catches for 601 yards with 4 touchdowns, while Marvin Jones Jr. has 35 grabs for 508 yards and 5 scores this season. Defensively, Romeo Okwara and Devon Kennard are tied for the team-high with 5 sacks while Jarrad Davis leads the Lions with 43 tackles this season. As a team, Detroit is averaging 347.6 yards of total offense and 22.4 points per game this season.

You could definitely argue that this game is must-win for Detroit, as a loss here would probably end all playoff hopes if there were any left. The problem is that Carolina has an extra couple days of rest, and that means a couple extra days to stew after being humiliated with everyone watching on Thursday night. I expect the Panthers to come into this game angry and to take out their frustrations on the hapless Lions, covering the spread in the process.