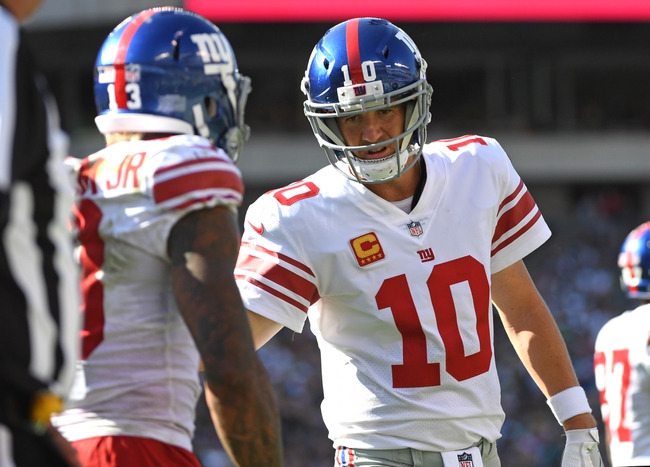 The New York Giants have a chance to win back-to-back games for the first time since December of 2016. The New York Giants haven’t won a home game since New Years Eve of last year. Eli Manning is completing 68.3 percent of his passes for 2,377 yards, eight touchdowns and six interceptions. Manning has one or less touchdown passes in six of his last eight games. Odell Beckham Jr. and Sterling Shepard have combined for 1,327 receiving yards and four touchdowns while Saquon Barkley has 58 receptions. The New York Giants ground game is averaging 77.9 yards per contest, and Barkley leads the way with 519 yards and five touchdowns. Defensively, New York is allowing 25.6 points and 366.4 yards per game. Landon Collins leads the New York Giants with 62 tackles, B.J. Hill has two sacks and Janoris Jenkins has two interceptions.

The Tampa Bay Buccaneers are coming off a game against the Washington Redskins in which they had no trouble moving the ball but couldn't finish drives. The Buccaneers now go on the road where they haven't won since opening week, and they're being outscored by 15 points during their four-game losing streak. The New York Giants actually looked like a decent football team last Monday night, as Eli was completing passes and the offense showed signs of life. Who knows how long it lasts, but the Giants are a capable team when Manning is kept upright, and they've won three of their last six games when topping 20 points. In a pick em game, I have more confidence in the Giants at home than I do the Buccaneers on the road. The Giants should be able to build on last week now that Odell Beckham and others finally got going.