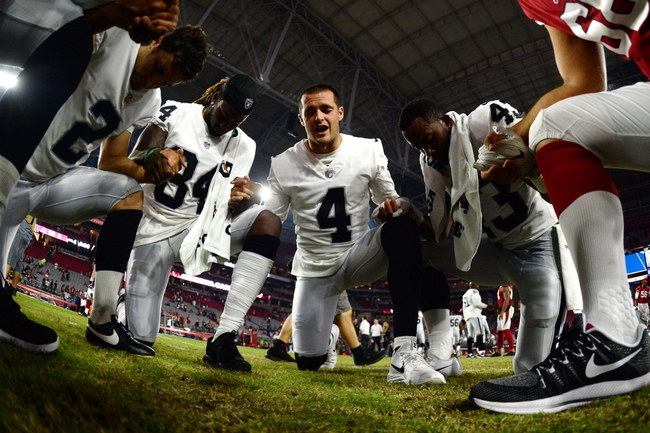 The Arizona Cardinals and Oakland Raiders meet up in the desert on Sunday in a show down of two of the league's weaker teams with draft lottery implications at stake.

The Oakland Raiders look for their first victory of the season on the road as they head into Arizona to do battle with the Cardinals in a game very few will be tuned in for unless you're involved in mock drafts and bottom feeder organizations. The Raiders have been a complete mess since Jon Gruden took over as they have sent some of the league's top young talent packing and are in line for a slew of draft picks as they anticipate their move from the Bay Area to Sin City in the coming years. Oakland has moved on from the likes of Khalil Mack, Amari Cooper, and Bruce Irvin this season and speculation continues around franchise quarterback Derek Carr who is just a few seasons removed from the Pro Bowl and signing on to be the team's signal caller of the future. The Raiders have played well against the Cardinals in recent memory though as they are 4-1 ATS in their last 5 show downs against Arizona and while the Cards have been underachieving they look as if they're in better shape than the Raiders as Arizona has the pieces in place to stay competitive in the next few seasons. Oakland is 2-8-1 ATS in their last 11 road games and will be in tough to stay close with even a Cardinals side who hasn't been able to do much of anything this season,

Arizona has had to deal with a handful of injuries this season and as such they haven't had the year many expected of them as David Johnson and company haven't been able to stay competitive. The Cards have done well against the number though as they are 5-1-1 ATS in their last 7 games overall and are only modest home favourites here against a Raiders side who looks like a shoe in to land the top overall draft pick in the offseason. THe Cards will send Josh Rosen behind center and while he has had his struggles in his rookie season there doesn't appear to be anyone on the Oakland side of the defensive line who will be able to disrupt The Arizona passing game and that will allow Johnson to get rolling on the ground. This looks like a winnable spot for the home team and covering a light number with the best player in the game seems like a strong possibility.

The pick in this article is the opinion of the writer, not a Sports Chat Place site consensus.
Previous Pick
NFL Power Rankings for the Week Starting November 15, 2018 (Before Week 11)
Next Pick
New Orleans Saints vs. Philadelphia Eagles - 11/18/18 NFL Pick, Odds, and Prediction