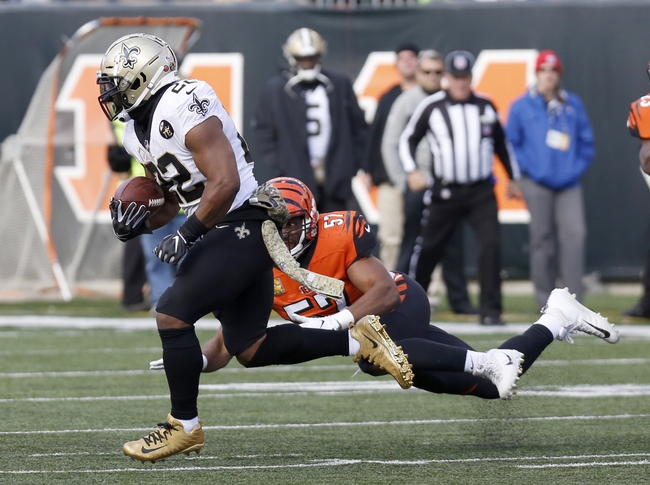 The Philadelphia Eagles and the New Orleans Saints meet in NFL action from the Mercedes-Benz Superdome on Sunday afternoon.

The Philadelphia Eagles will look for a win to get back to .500 after falling to 4-5 with a 27-20 loss to Dallas in their last outing. Carson Wentz has thrown for 2,148 yards, 15 touchdowns and 3 interceptions on 71% passing, while Wendell Smallwood leads the Eagles with 261 rushing yards this season. Zach Ertz leads the Eagles’ receiving corps with 75 grabs for 789 yards and 5 TDs while Nelson Agholor has 46 catches for 455 yards and Alshon Jeffery has 4 receiving touchdowns this season. Defensively, Michael Bennett leads the Eagles with 5.5 sacks while Jordan Hicks has 3 sacks and a team-high 53 tackles this season. As a team, Philadelphia is averaging 372.9 yards of total offense and 22 points per game this season.

The New Orleans Saints will look to stay hot after making it 8 wins in a row with a 51-17 whooping of Cincinnati in their last outing. Drew Brees has thrown for 2,601 yards, 21 touchdowns and an interception on 77.3% passing while Alvin Kamara has rushed for 546 yards and 11 touchdowns this season. Michael Thomas leads the Saints with 78 grabs for 950 yards and 7 touchdowns while Kamara has 55 catches out of the backfield for 473 yards and 3 touchdowns. Defensively, Cameron Jordan has 6 sacks and Sheldon Rankins has 5 sacks while Demario Davis leads the Saints with 46 tackles this season. As a team, the Saints are one of the best in the league offensively, sitting top-10 in total yardage (413.9 YPG/5th in NFL), passing yardage (287.1 YPG/7th) and rushing yardage (126.8 YPG/8th) in addition to owning the NFL’s highest scoring offense with 36.7 points per game this season. The Saints are also stout against the run, allowing the fewest rushing yards against per game, giving up just 80.1 yards per game on the ground this season.

Getting nearly double-digits with the Eagles is tempting considering Philadelphia has so much on the line in this game in regards to their playoff hopes. However, the Eagles have had issues scoring, breaking 24 points just once this season. New Orleans has been rolling since their opening week loss, and has scored 24 points or more in 8 of their 9 games this season, including the opening week loss which they still put up 40 in a losing effort. All in all, I just see New Orleans being too much for the Eagles to handle so I’ll lay the points with New Orleans here.