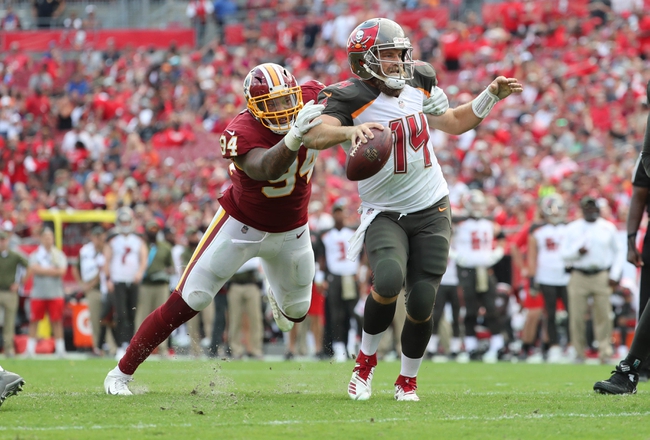 The Tampa Bay Buccaneers and the New York Giants meet in NFL action from MetLife Stadium on Sunday afternoon.

The Tampa Bay Buccaneers will look to find a win after losing 3 straight and 6 of their last 7 games following a 16-3 loss to Washington in their last outing. Ryan Fitzpatrick leads the Bucs with 2,199 passing yards, 17 touchdowns and 9 interceptions on 67.1% passing while Peyton Barber leads the Bucs with 437 rushing yards this season. Mike Evans leads Tampa Bay’s receiving group with 50 catches for 837 yards this season to go along with 4 touchdowns. DeSean Jackson has tallied 693 receiving yards and 4 TDs while O.J. Howard has caught a team-high 5 touchdown grabs this season. Defensively, Jason Pierre-Paul leads the Buccaneers with 8 sacks this season while Lavonte David is Tampa Bay’s top tackler with 56 tackles this season. As a team, the Buccaneers own the top offense in the league in terms of total yardage and passing yardage with 452.8 yards of total offense and 361.2 passing yards per game to go along with 25.8 points per game this season.

The New York Giants will look to build their confidence after snapping a 5 game losing streak with a 27-23 win over the San Francisco 49ers in their last outing. Eli Manning has thrown for 2,565 yards, 11 touchdowns and 6 interceptions on 67.6% passing while Saquon Barkley has rushed for a team-high 586 yards and 5 touchdowns this season. Odell Beckham Jr. leads the G-Men with 65 grabs for 858 yards and 4 touchdowns while Sterling Shepard has 551 receiving yards and 3 scores and the aforementioned Barkley has 62 receptions for 530 yards this year. Defensively, B.J. Hill and Lorenzo Carter are tied for the team-lead with 2 sacks while Landon Collins leads Big Blue in tackles with 51 tackles this season. As a team, New York is averaging 344.8 yards of total offense and 19.7 points per game this season.

Something’s gotta give here between two of the worst teams in the NFC, as Tampa Bay’s lost 3 straight and 6 of 7, while New York has yet to win at home this season. The Bucs have the worst scoring defense in the league, but they did allow just 16 points in the loss last week and have the more trustworthy offense between the two, so I’ll take the Buccaneers and the free points here.