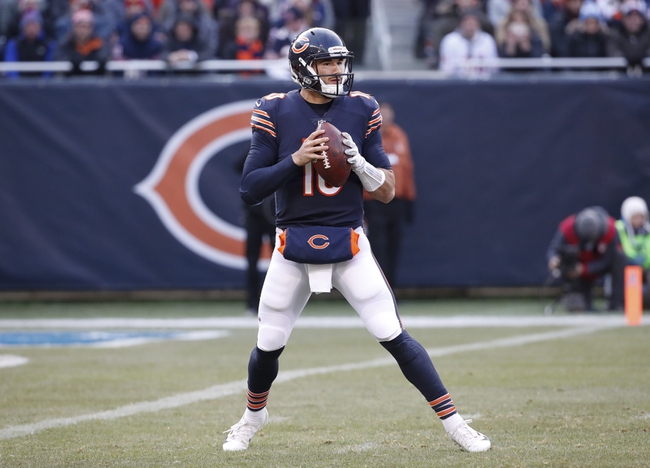 The Chicago Bears and the Detroit Lions meet in Thanksgiving Day NFL action from Ford Field on Thursday afternoon.

The Chicago Bears enter this game with a record of 7-3 following a 25-20 win over Minnesota to push their winning streak to 4 games. Mitch Trubisky has thrown for 2,469 yards, 20 touchdowns and 9 interceptions on 65.4% passing while Jordan Howard leads the Bears in rushing with 523 rushing yards and 5 touchdowns this season. Taylor Gabriel leads the Bears with 44 catches for 478 yards, while Tyrik Cohen has 40 grabs for 458 yards and Allen Robinson II comes right behind with 457 receiving yards and 4 touchdown.s. Trey Burton and Anthony Miller each have 5 receiving TDs this season as well. Defensively, Khalil Mack leads the Bears with 8 sacks while Kyle Fuller has 4 interceptions and Roquan Smith leads Chicago with 55 tackles this season. As a team, Chicago is averaging 357.9 yards of total offense and 29.4 points per game this season. The Bears are also a tough nut to crack on defense, sitting top-5 in the league in terms of total yardage (314.4 YPG/3rd in NFL), rushing yards against (77.8 YPG/1st) and scoring defense (19.5 PPG/4th) this season.

The Lions need this game and want some measure of revenge after Chicago took the first meeting just over a week ago, but I’m not sure how confident I am backing Detroit here. The Lions did get a much-needed win last week, but Cam Newton and the Panthers bailed them out by missing a wide-open receiver on a questionable 2-point convert attempt rather than force overtime. Chicago is looking like what they are right now, and that’s the best team in the NFC North, so I’ll lay the points with Chicago in a game I see the Bears winning by at least a touchdown.

The pick in this article is the opinion of the writer, not a Sports Chat Place site consensus.
Previous Pick
NFL Power Rankings for the Week Starting November 22, 2018 (Before Week 12)
Next Pick
Los Angeles Chargers vs. Arizona Cardinals - 11/25/18 NFL Pick, Odds, and Prediction