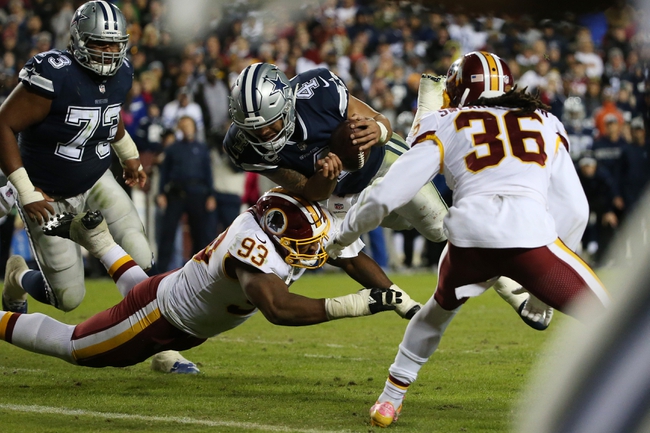 The Washington Redskins and the Dallas Cowboys will meet up on Thanksgiving Day for an NFL divisional rivalry game from AT&T Stadium.

The Redskins come into this one at 6-4 overall. After opening up with a 2-2 record over the first four games, the Redskins have taken out the Panthers, Cowboys, Giants and Bucs while falling to the Falcons and Texans.

In that Houston game, Redskins QB Alex Smith threw two picks before coming out with a gruesome injury. Adrian Peterson posted 51 yards and a pair of TDs and Jordan Reed led the receivers for the Redskins on 71 yards and a TD from seven grabs.

Over on the Cowboys’ side, they’re currently 5-5 on the year. After a pretty sketchy start to the season, Dallas has now won their last pair, taking out the Eagles and Falcons.

In the Atlanta game, Cowboys QB Dak Prescott put up 208 yards, and Ezekiel Elliott had a great outing on 122 yards and a score. Elliott also led the receivers with 79 yards on seven catches for Dallas.

Is the Redskins’ season over following the Smith injury? Well, the short answer is probably, but they do have some winnable games left on the schedule—yes, even including this one—so anything can happen. Expect a heavy dose of Peterson the rest of the way, though.

As for Dallas, they’ve got a shot at winning the division but they’ve got to get through this rather tough three-game stretch first.

I’m going to stick with the Cowboys here, especially on the short turnaround. If the line keeps inflating (to say, double-digits) I may change my tune, though.