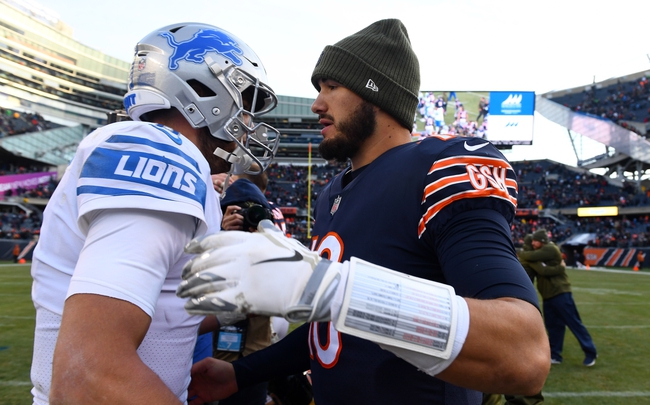 The Chicago Bears and Detroit Lions meet Thursday on Thanksgiving in NFL action at Ford Field.

The Chicago Bears look to build on their four-game winning streak while starting to run away with the NFC North division. The Chicago Bears have split their last four road games. Mitchell Trubisky is completing 65.4 percent of his passes for 2,469 yards, 20 touchdowns and nine interceptions. Trubisky has two or more touchdown passes in five of his last seven games. Taylor Gabriel and Tarik Cohen have combined for 936 receiving yards and five touchdowns while Allen Robinson has 34 receptions. The Chicago Bears ground game is averaging 122.9 yards per contest, and Jordan Howard leads the way with 523 yards and five touchdowns. Defensively, Chicago is allowing 19.5 points and 314.4 yards per game. Roquan Smith leads the Chicago Bears with 70 tackles, Khalil Mack has eight sacks and Kyle Fuller has four interceptions.

The Detroit Lions need a win here after splitting their last six games in hopes of saving their season. The Detroit Lions have won three of their last four home games. Matthew Stafford is completing 66.3 percent of his passes for 2,605 yards, 17 touchdowns and eight interceptions. Stafford has three or more touchdown passes in seven of his last nine games. Kenny Golladay and Marvin Jones Jr. have combined for 1,222 receiving yards and 10 touchdowns while Theo Riddick has 41 receptions. The Detroit Lions ground game is averaging 100.4 yards per contest, and Kerryon Johnson leads the way with 641 yards and three touchdowns. Defensively, Detroit is allowing 26.3 points and 364.6 yards per game. Jarrad Davis leads the Detroit Lions with 63 tackles, Devon Kennard has six sacks and Darius Slay has two interceptions.

The Chicago Bears are quickly becoming a balanced football team that doesn't have to rely on their defense every game, and they're outscoring teams by 15.75 points during their four-game winning streak. The Detroit Lions are coming off a surprise win over the Carolina Panthers, but they're avering just 17 points in their last three games and are now dealing with a knee injury to running back Kerryon Johnson. The Chicago Bears have covered six of their last eight games when a favorite of at least three points. The Detroit Lions have failed to cover nine of their last 13 games when an underdog of at least three points. The Detroit Lions offense is very limited, and they're now going up against one of the best and most confident defenses in the league on short rest. Trubisky and that Bears offense is also making progress lately. I have to lay the chalk here, taking the Bears by a touchdown.

The pick in this article is the opinion of the writer, not a Sports Chat Place site consensus.
Previous Pick
NFL Power Rankings for the Week Starting November 22, 2018 (Before Week 12)
Next Pick
Los Angeles Chargers vs. Arizona Cardinals - 11/25/18 NFL Pick, Odds, and Prediction