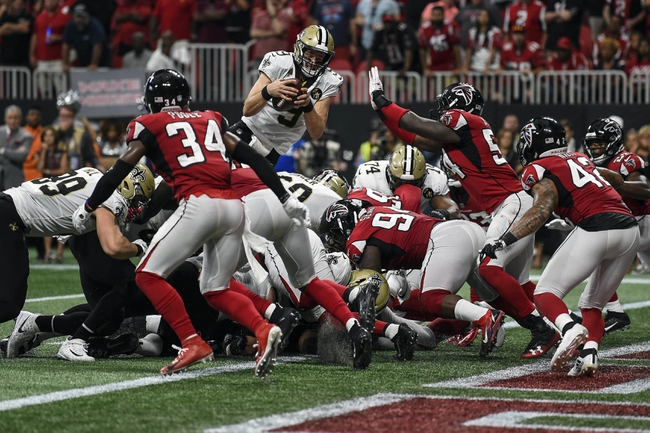 The Atlanta Falcons need a win here to save their season after losing five of their last eight games. The Atlanta Falcons have lost three of their last four road games. Matt Ryan is completing 71.1 percent of his passes for 3,306 yards, 22 touchdowns and four interceptions. Ryan has one touchdown pass in three of his last six games. Julio Jones and Calvin Ridley have combined for 1,690 receiving yards and 10 touchdowns while Mohamed Sanu has 38 receptions. The Atlanta Falcons ground game is averaging 88.8 yards per contest, and Tevin Coleman leads the way with 500 yards and two touchdowns. Defensively, Atlanta is allowing 27.6 points and 405.2 yards per game. De'Vondre Campbell leads the Atlanta Falcons with 55 tackles, Takkarist McKinley has 5.5 sacks and Damontae Kazee has five interceptions.

The Atlanta Falcons looked like they turned their season around with three straight wins until they lost back-to-back games to the Cleveland Browns and the Dallas Cowboys. The New Orleans Saints remain the hottest team in the league with nine straight wins and each of their last four wins have been decided by 10 or more points. The Atlanta Falcons have covered their last five games as a double-digit underdog. The New Orleans Saints have split their last 10 games ATS as a double-digit favorite. The spreads for the New Orleans Saints are getting larger and larger by the week, but I did say about a month ago that I'm not looking to step in front of this team. For the most part, the Saints are beating the hell out of teams, and this game should be no different against an Atlanta Falcons defense that can't stop a nose bleed. Laying double-digit chalk on short rest in an NFL game sounds crazy, but I can't back the Falcons given the inconsistent play and the trash defense.

The pick in this article is the opinion of the writer, not a Sports Chat Place site consensus.
Previous Pick
Dallas Cowboys vs. Washington Redskins - 11/22/18 NFL Pick, Odds, and Prediction
Next Pick
NFL Power Rankings for the Week Starting November 22, 2018 (Before Week 12)