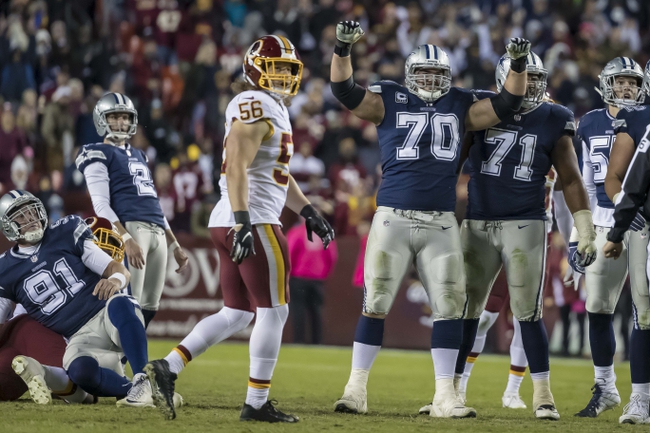 The Washington Redskins and Dallas Cowboys meet Thursday on Thanksgiving in NFL action at AT&T Stadium.

The Dallas Cowboys look for a third straight victory to get a game above a .500 record. The Dallas Cowboys have won three of their last four home games. Dak Prescott is completing 64.6 percent of his passes for 2,138 yards, 11 touchdowns and five interceptions. Prescott has one or less touchdown passes in 10 of his last 13 games. Cole Beasley and Ezekiel Elliott have combined for 795 receiving yards and four touchdowns while Michael Gallup has 16 receptions. The Dallas Cowboys ground game is averaging 133.3 yards per contest, and Elliott leads the way with 953 yards and five touchdowns. Defensively, Dallas is allowing 19 points and 331.1 yards per game. Leighton Vander Esch leads the Dallas Cowboys with 84 tackles, DeMarcus Lawrence has eight sacks and Xavier Woods has one interception.

The Washington Redskins have scored no more than 21 points in each of their last five games and now has a starting quarterback who has 23 pass attempts in the last three years and hasn't started a game since 2014. The Dallas Cowboys are coming off back-to-back solid road wins and return home where they where they're outscoring teams by an average of seven points. The Washington Redskins have split their last 10 games ATS when an underdog of at least seven points. The Dallas Cowboys have failed to cover seven of their last 10 games when a favorite of at least seven points. The Redskins had issues scoring points with Alex Smith, as there's no deep threat to open up the offense and the receivers overall aren't very good. A logical guess would be things will be even worse with McCoy under center. I don't like backing the Cowboys and don't trust their coaching staff at all, but how in the hell are the Redskins going to move the ball? Stack the box, take away the ground game and dare McCoy to make throws. The Cowboys should roll here. Should is the key word.