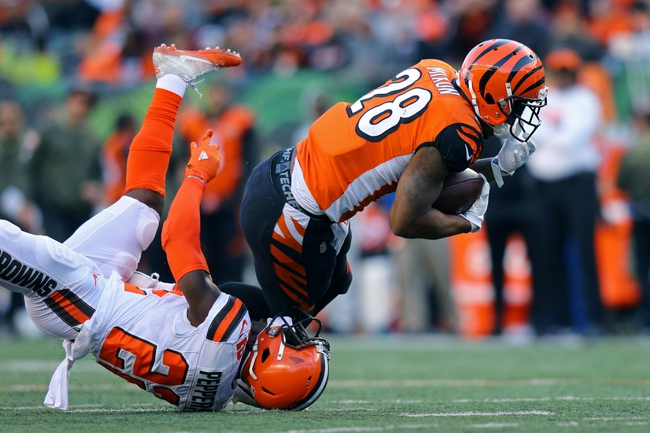 The Cleveland Browns and the Cincinnati Bengals will match up in a divisional NFL battle on Sunday at Paul Brown Stadium.

The Browns are 3-6-1 on the season so far, and if a couple of things had broken their way they could easily have a few more wins. In addition to tying the Steelers in Week 1, Cleveland has beaten the Jets, Ravens and Falcons.

In the Falcons game, Cleveland QB Baker Mayfield put up 216 yards and three TDs, and Nick Chubb rushed for 176 yard a TD. Antonio Callaway was the lead receiver for the Browns on 39 yards from two catches.

Over on the Bengals’ side, they’re 5-5 this season. After starting out at 4-1 this year, Cincinnati has dropped four of five and both of their last two games versus the Saints and Ravens.

In the Baltimore game, Cincinnati QB Andy Dalton logged 211 yards and two touchdowns, and also led the rush with 29 yards. Tyler Boyd was the top receiver for the Bengals with his 71 yards on four catches.

The Browns are no longer the league’s punching bag, and things are looking up in Cleveland. Even in Cleveland’s losses, they’ve been competitive in most, so this isn’t a “pencil in a win” situation by any stretch.

As for Cincinnati, they’ve lost some steam after a good start and have lost four of their last five outings. I’m still going to take the Bengals if the line is around a field goal, but if it gets much thicker that won’t be the case.