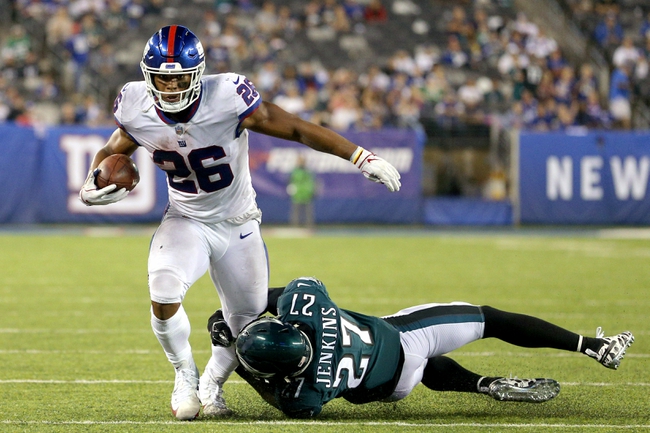 The New York Giants and the Philadelphia Eagles will be meeting up in a divisional NFL rivalry game on Sunday from Lincoln Financial Field.

The Giants stumble into this one at 3-7 on the season. After starting out the year at just 1-7 with a lone win over the Texans, New York has won their last pair versus the 49ers and the Buccaneers.

Over on the Philly side, they’re 4-6 this season. The Eagles started out at 2-1, but haven’t been able to get much going—especially lately. Philadelphia has lost their last pair to the Cowboys and Saints.

In the 48-7 beatdown from New Orleans, Eagles QB Carson Wentz logged 156 yards and three interceptions, while Josh Adams led the rush on 53 yards and a TD. Golden Tate was the top receiver for Philly with 48 yards from five catches.

New York needs some major upgrading this offseason—and must address the eventual retirement of Manning—but they do have some pieces in place, namely Barkley.

As for the Eagles, they’re not the Philly of last year and they’re going to have to dig in if they even want to have an outside crack at the playoffs.

Still, Philadelphia is the better team and I think they have better odds at a cover.