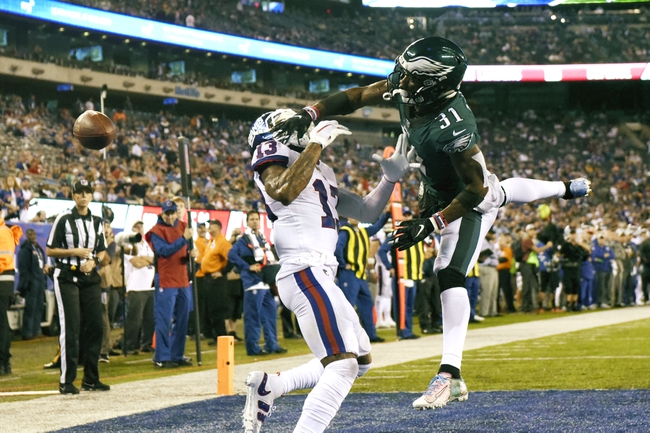 The New York Giants look for a third straight victory to keep their near nonexistent playoff hopes alive. The New York Giants have split their last four road games. Eli Manning is completing 69 percent of his passes for 2,796 yards, 13 touchdowns and six interceptions. Manning has one or less touchdown passes in six of his last nine games. Odell Beckham Jr. and Sterling Shepard have combined for 1,500 receiving yards and eight touchdowns while Saquon Barkley has 64 receptions. The New York Giants ground game is averaging 88.3 yards per contest, and Barkley leads the way with 728 yards and seven touchdowns. Defensively, New York is allowing 26.3 points and 381.5 yards per game. Landon Collins leads the New York Giants with 82 tackles, B.J. Hill has two sacks and Janoris Jenkins has two interceptions.

The New York Giants have put together back-to-back solid performances in which the offense has woken up, and they're averaging 32.5 points in those two wins. The Philadelphia Eagles have scored a combined 27 points in their last two games and haven't won at Lincoln Financial Field since September 23. The New York Giants have covered each of their last five games when an underdog of last four points. The Philadelphia Eagles have failed to cover five of their last six games when a favorite of last four points. The Eagles aren't consistent enough offensively to lay decent size chalk with, and their secondary is too bagned up to trust against these Giants receivers. Also, you can make a strong case the Giants are better than their record indicates, as they're winning rcently, and five of their seven losses have been decided by seven or less points. I have to take the points here.