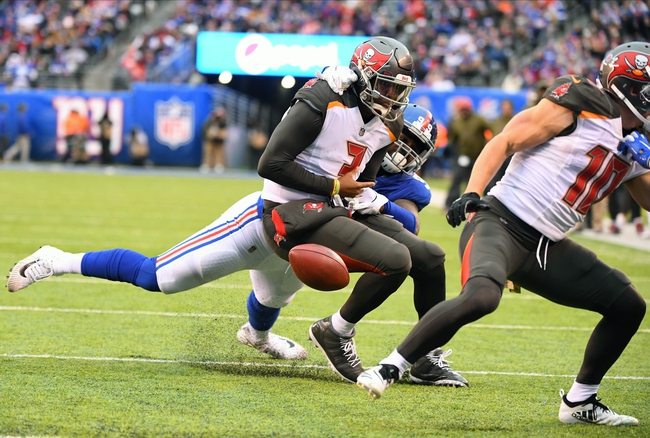 The San Francisco 49ers need a win to turn things around after a 27-23 loss to the Giants before their bye week dropped San Fran to 2-8 this season. Nick Mullens has thrown for 512 yards, 4 touchdowns and 2 interceptions on 70.5% passing this year, while Matt Breida leads the 49ers with 632 yards and 3 touchdowns on the ground this season. George Kittle leads the 49ers receivers with 50 catches for 775 yards with 3 touchdowns while Marquise Goodwin has 4 receiving TDs this season. Defensively, DeForest Buckner leads the 49ers’ D with 6 sacks while Fred Warner has a team-high 58 tackles this season. As a team, San Francisco is averaging 356.5 yards of total offense, including the 3rd-most rushing yards per game in the league with 133.6 per contest to go along with 23 points per game this season.

The Tampa Bay Buccaneers need a win after losing 4 straight and 7 of their alst 8 games following a 38-35 loss to New York in their last outing. Ryan Fitzpatrick has thrown for 2,366 yards, 17 touchdowns and 12 interceptions on 66.7% passing while Peyton Barber leads Tampa Bay in rushing with 543 rushing yards this season. Mike Evans leads Tampa Bay with 56 catches for 957 yards and 5 touchdowns while DeSean Jackson has 731 yards and 4 TDs and O.J. Howard and Chris Godwin each have 500+ receiving yards and 4+ touchdowns this season. Defensively, Jason Pierre-Paul leads the Buccaneers with 9.5 sacks while Lavonte David leads the Bucs with 56 tackles this season. As a team, Tampa Bay is averaging the most total offense and passing yardage per game this season with 458.5 yards of total offense and 361 passing yards per game while averaging 26.7 points per game this season.

Neither of these teams are ones I feel comfortable backing, and while I went back and forth on the pros and cons between the two sides, I can’t bring myself to put up my hard-earned money with one over the other, which is why I’m siding with the over here, both teams have shown the ability to put points on the board, and neither one have really been able to keep points off of the board this season, so this is a game that I could see both teams ending up in the 30s, covering the over in the process.