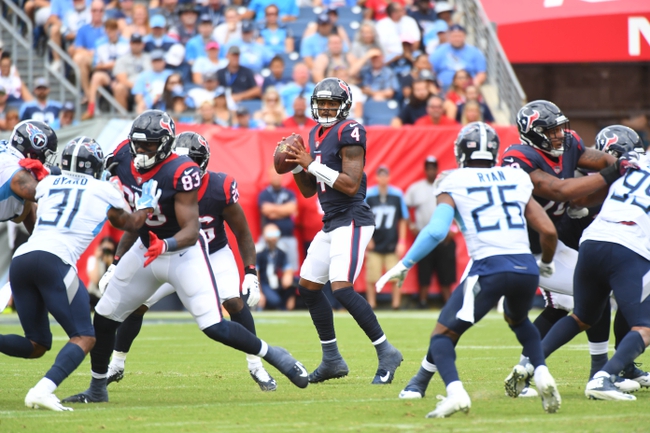 The Houston Texans look to start running away with the AFC South division while building on their seven-game winning streak. The Houston Texans have won three straight home games. Deshaun Watson is completing 65 percent of his passes for 2,597 yards, 18 touchdowns and nine interceptions. Watson has two or more touchdown passes in 10 of his last 15 games. DeAndre Hopkins and Keke Coutee have combined for 1,223 receiving yards and nine touchdowns while Ryan Griffin has 11 receptions. The Houston Texans ground game is averaging 122.1 yards per contest, and Lamar Miller leads the way with 611 yards and two touchdowns. Defensively, Houston is allowing 20.5 points and 330.5 yards per game. Benardrick McKinney leads the Houston Texans with 70 tackles, J.J. Watt has 10 sacks and Justin Reid has three interceptions.

The Tennessee Titans came out of the bye week looking like a completely different team on both sides of the ball. The Titans then got smoked by the Colts, looking like the Titans of old and Mariota is dealing with an elbow issue. The Houston Texans have won seven straight games, but it's important to note that five of those seven victories have been decided by seven or less points. The Tennessee Titans have covered eight of their last 10 games when an underdog of at least four points. The Houston Texans have failed to cover four of their last six games when a favorite of at least four points. I honestly have no idea what to think of the Titans, a team I was never high on and the second I give them a chance, they get their boots smoked by a subpar Colts team. The Houston Texans were my preseason Super Bowl pick, and while a lot of their games are close, they have the ability to blow you out if you're not matching their energy. With a banged up Mariota, I have to side with the Texans, even though I don't love the number.