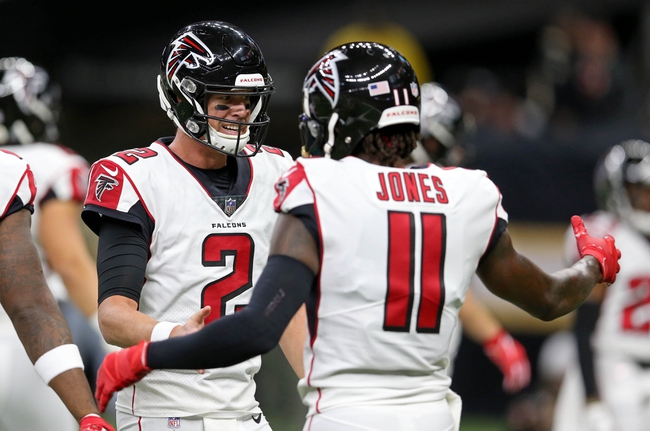 The Baltimore Ravens look for a win here after splitting their last eight games to stay in the thick of the AFC playoff race. The Baltimore Ravens have split their last four road games. Lamar Jackson is completing 60.7 percent of his passes for 415 yards, two touchdowns and three interceptions. Jackson enters this game with 56 career pass attempts under his belt. John Brown and Michael Crabtree have combined for 1,149 receiving yards and seven touchdowns while Willie Snead IV has 50 receptions. The Baltimore Ravens ground game is averaging 122.1 yards per contest, and Alex Collins leads the way with 411 yards and seven touchdowns. Defensively, Baltimore is allowing 18 points and 295.4 yards per game. C.J. Mosley leads the Baltimore Ravens with 72 tackles, Matthew Judon has six sacks and Brandon Carr has one interception.

The Atlanta Falcons look to play spoiler at this point while snapping a three-game losing streak. The Atlanta Falcons have split their last six home games. Matt Ryan is completing 71.4 percent of his passes for 3,683 yards, 24 touchdowns and five interceptions. Ryan has one touchdown pass in three of his last seven games. Julio Jones and Calvin Ridley have combined for 1,930 receiving yards and 11 touchdowns while Mohamed Sanu has 42 receptions. The Atlanta Falcons ground game is averaging 83.1 yards per contest, and Tevin Coleman leads the way with 506 yards and two touchdowns. Defensively, Atlanta is allowing 27.9 points and 396.7 yards per game. De'Vondre Campbell leads the Atlanta Falcons with 62 tackles, Takkarist McKinley has 5.5 sacks and Damontae Kazee has six interceptions.

The Baltimore Ravens have put together 58 points in their last two games with Jackson at quarterback and are coming off a contest in which they rushed for 242 yards. The Atlanta Falcons have had defensive issues all season long, but now the offense is averaging just 17.3 points during this three-game losing streak, something that's unexpected given the weapons on this squad. The Baltimore Ravens have split their last eight games ATS when favored by at least two points. The Atlanta Falcons have failed to cover five of their last six games when an underdog of at least two points. This should be an easy play with the Ravens and the chalk given the way both teams are playing. However, I don't expect the Falcons offensive issues to stick around much longer, and they usually light it up in the dome. This will also be Jackson's first career road start. The Falcons have also had extra time to prepare for this new Ravens offense considering they played on Thanksgiving. Something is telling me to take the points and the Falcons at home.