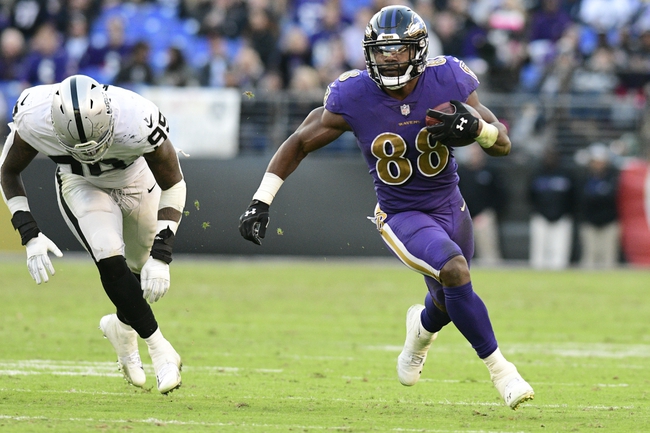 The Baltimore Ravens and the Atlanta Falcons meet in week 13 NFL action from Mercedes-Benz Stadium on Sunday afternoon.

The Baltimore Ravens will be looking to build on back-to-back wins after a 34-17 win over Oakland in their last outing. Joe Flacco has thrown for 2,465 yards, 12 touchdowns and 6 interceptions but is still expected to miss this game due to a hip injury. Lamar Jackson has thrown for 415 yards, 2 touchdowns and 3 picks in his absence, while Alex Collins leads the Ravens in rushing with 411 yards and 7 touchdowns this season. John Brown leads the Ravens’ receiving corps with 649 yards and 4 touchdowns while Michael Crabtree has 45 grabs for 500 yards and 3 TDs and Willie Snead IV has a team-high 50 catches for 499 yards this season. Defensively, Matthew Judon has 6 sacks while Za’Darius Smith and Terrell Suggs each have 5.5 sacks and C.J. Mosley leads the Ravens with 48 tackles this season. As a team, Baltimore is averaging 374.4 yards of total offense and 24.6 points per game this season. The Ravens remain one of the NFL’s top defensive units, sitting top-3 in terms of total yardage (295.4 YPG/1st in NFL), passing yardage against (203.3 YPG/2nd) rushing yardage against (92.1 YPG/3rd) and scoring defense (18 PPG/1st) this season.

The Atlanta Falcons are in dire need of a win after 3 straight losses for fall to 4-7 this season following a 31-17 loss to New Orleans in their last outing. Matt Ryan has thrown for 3,683 yards, 24 touchdowns and 5 interceptions on 71.4% passing while Tevin Coleman has rushed for 506 yards this season. Julio Jones leads the Falcons in receiving with 84 catches for 1,305 yards while Calvin Ridley has 625 receiving yards and 8 touchdowns and Mohamed Sanu has 546 yards through this air this season. Defensively, Takkarist McKinley leads Atlanta with 6 sacks and Jack Crawford has added 5 sacks while De’Vondre Campbell leads Atlanta with 44 tackles this season. As a team, Atlanta is averaging 400 yards of total offense and 25.5 points per game this season.

This is going to be an interesting affair with both teams still in the hunt in their respective playoff races despite not having very good records. The Ravens have looked almost rejuvenated with Jackson under center, but I have to wonder how long that will last, especially in Jackson’s first true road start as an NFL QB. Mercedes-Benz Stadium always seems to get up as one of the tougher places to go on the road in the league, and I expect no different for this game with Atlanta’s playoff hopes pretty much on the line in this one. I’ll lay the point with Atlanta as I see the Falcons coming out on top here.