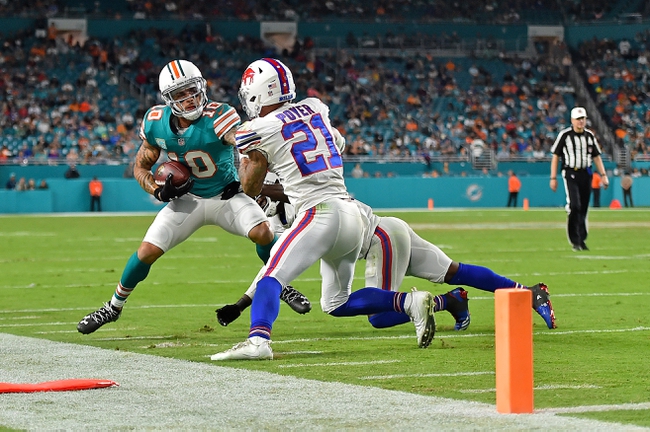 The Buffalo Bills and the Miami Dolphins will meet up in Week 13 NFL activity on Sunday.

Buffalo comes into this game at 4-7 on the season. The Bills stumbled out of the gate, losing three of their first four, but since have secured a few wins over the Titans, Jets and Jaguars.

In the Jacksonville victory 24-21, Buffalo’s Josh Allen tossed for 160 yards and a TD, and also led the rush with 13 carries for 99 yards and a score. Robert Foster had two big catches for 94 yards and a TD to lead the Bills receivers.

Over on the Miami side, they’re 5-6 this year thus far. The Phins came out of the gate fairly strong but have faded lately, losing four of their last five outings versus the Lions, Texans, Packers and Colts.

In the Indy game, Miami QB Ryan Tannehill logged 204 yards and two TDs, and Frank Gore led the rush with 67 yards. Tops in receiving yardage for the Dolphins was Leonte Caroo, who hauled in one long 74-yard TD catch.

Meanwhile, the Dolphins are 4-1 ATS in their last five home games and 3-7-1 ATS versus a team with a losing record. Miami is 5-15 ATS in the last 20 in December and the under is 4-0 in their last four versus the AFC East.

Don’t look now, but Buffalo has a winning streak going. Furthermore, the Bills have scored 65 points over their last two games, which is admittedly difficult to fathom.

As for Miami, they’ve put up just just 49 points over their last three outings, which is probably why the line on this one continues to shrink.

There’s not a whole lot of intrigue here, but I think the Bills have figured things out well enough that they can flirt with a cover--and maybe even a win.