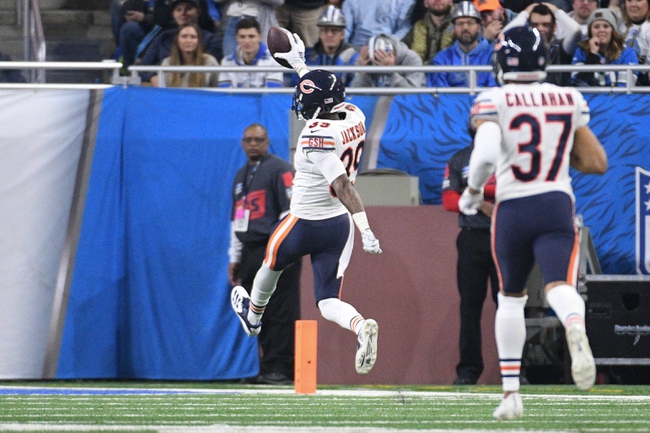 The Chicago Bears and the New York Giants meet in week 13 NFL action from MetLife Stadium on Sunday afternoon.

The Chicago Bears will look to add to their current 5-game winning streak after a 23-16 win over Detroit on Thanksgiving day. Mitch Trubisky has thrown for 2,469 yards, 20 touchdowns and 9 interceptions while Jordan Howard leads Chicago in rushing with 536 yards and 5 touchdowns this season. Taylor Gabriel leads the Bears in receiving with 51 catches for 527 yards while Tarik Cohen has 47 catches for 503 yards out of the backfield. Allen Robinson II has 36 grabs for 494 yards and 4 touchdowns while Trey Burton and Anthony Miller each have 5 touchdown receptions this season. Defensively, Khalil Mack leads the Bears with 8 sacks while Roquan Smith has 4 sacks and a team-high 62 tackles this season. As a team, Chicago is averaging 349.4 yards of total offense and 28.8 points per game this season. The Bears are also extremely tough defensively, allowing the 2nd-fewest points against per game in the league, giving up just 19.2 points per game this season.

The New York Giants will look to bounce back after falling just short of their 3rd straight win, falling to Philadelphia by a final score of 25-22 in their last outing. Eli Manning has thrown for 3,093 yards, 14 touchdowns and 7 picks while Saquon Barkley has rushed for 829 yards and 8 touchdowns this season. Odell Beckham Jr. leads the G-Men with 74 receptions for 1,017 yards and 5 touchdowns while Sterling Shepard has 610 receiving yards and the aforementioned Barkley has 71 catches for 581 yards and 4 touchdowns this year. Defensively, B.J. Hill, Lorenzo Carter and Mario Edwards are tied for the team-high with 2 sacks while Landon Collins leads New York with 64 tackles this season. As a team, New York is averaging 351.3 yards of total offense and 21.5 points per game this season.

You could definitely make a case for the Giants as New York is playing better than their record would indicate and have lost their last 5 games and 6 of their last 7 games by a touchdown or less, including 4 or less in each of their last 3 games. However, the Bears are rolling right now, and are close to locking up their first division title since 2010. Chicago also took down Detroit with their backup in last week, and while the Giants are arguably playing better than Detroit right now, I just don’t see the result being any different. I’ll lay the points with Chicago in this one.