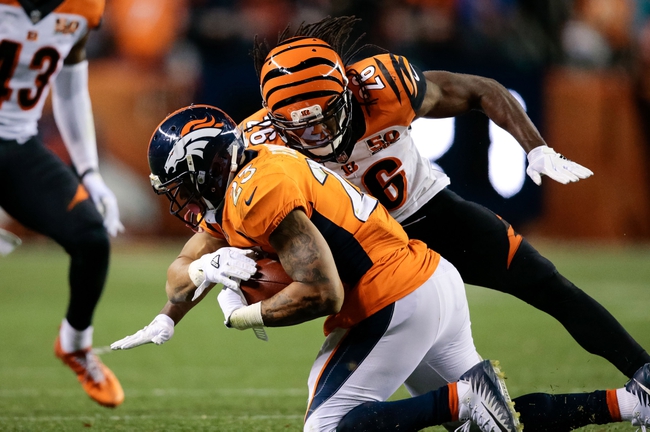 The Denver Broncos and the Cincinnati Bengals will be meeting up in NFL activity on Sunday from Paul Brown Stadium.

The Broncos come into this one at 5-6 on the year. Denver started thing off with two wins then four straight losses, and haven’t really gotten on track since then despite getting victories in their last two outings versus the Chargers and Steelers.

In the Pittsburgh game, Broncos QB Case Keenum logged 197 yards and two scores, while Phillip Lindsay led the rush on 110 yards and a TD. Emmanuel Sanders was the lead Broncos receiver on 86 yards and a score off seven grabs.

Over on the Bengals’ side, they’re 5-6 this season as well. Cincinnati has a couple of good wins this year, but for the most part they’re getting beaten up by the NFL’s more talented teams—not to mention the up-and-coming ones.

The Bengals fell to one such upstart team on Sunday versus the Browns. In that one, Cincinnati QB Andy Dalton provided 100 yards, a TD and a pick, and Joe Mixon put up 155 yards from scrimmage. Tyler Boyd was the top Bengal receiver on 85 yards and a TD from seven catches.

Realistically, the Broncos aren’t as bad a team as you may think. Sure, they’re destined for the middle of the pack at best this season, but in many of their losses they've been within striking distance at the end of the game.

The Bengals aren’t rocking anyone’s proverbial world this year either, and it looks like they’ve wasted another opportunity to take the division. With Dalton banged up (thumb), I don’t see Cincy doing much here. I’m going Denver.