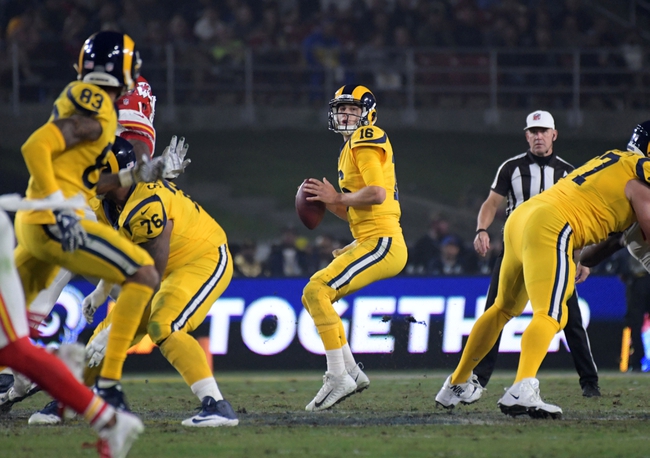 The Los Angeles Rams and the Detroit Lions meet in NFL action from Ford Field on Sunday afternoon.

The Los Angeles Rams come into this game with a record of 10-1 after their bye week, which followed a 54-51 shootout win over Kansas City on Monday night football. Jared Goff has thrown for 3,547 yards, 26 touchdowns and 6 interceptions on 67.7% passing while Todd Gurley leads the Rams on the ground with 1,043 rushing yards and 13 touchdowns this season. Brandin Cooks and Robert Woods are tied for the team-high with 59 catches this season while Cooks has 964 yards and 3 TDs to Woods’ 904 yards and 4 touchdowns this year. Defensively, Aaron Donald leads not only the Rams but the entire NFL with 14.5 sacks while Cory Littleton leads the Rams with 66 tackles this season. As a team, Los Angeles is averaging the 2nd-most total offensive yardage per game with 448.6 yards of total offense to go along with the league’s 3rd-highest scoring offense with 35.4 points per game this season.

The Detroit Lions will look for a bounce-back win after losing 4 of their last 5 games after a 23-16 loss to Chicago on Thanksgiving Day. Matt Stafford has thrown for 2,841 yards, 17 touchdowns and 10 interceptions while Kerryon Johnson leads the Lions with 641 rushing yards and 3 touchdowns. Kenny Golladay leads the Lions’ receiving corps with 52 grabs for 804 yards and 5 touchdowns while Marvin Jones Jr. has 508 receiving yards and 5 touchdowns of his own. Defensively, Devon Kennard leads the Lions with 6 sacks and Romeo Okwara has 5.5 sacks while Jarrad Davis has 4 sacks and a team-leading 50 tackles this season. As a team, Detroit is averaging 342.7 yards of total offense and 21.6 points per game this season.

The home team has had a lot of luck ATS in this matchup, and the Rams have scuffled lately against the number so the points could be worth a look. However, one of the league’s best offenses in the Rams has had an extra week to rest and prepare for their final stretch of games and are for sure looking to lock up home field advantage sooner rather than later. Detroit’s season is pretty much done after the loss to Chicago, and I think the Rams put the final nail in the coffin with a win by a couple of scores in this one, so I’ll lay the points with Los Angeles here.