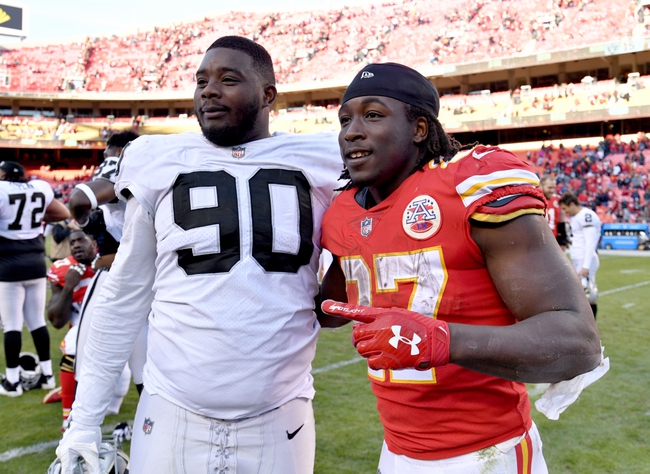 The Kansas City Chiefs and Oakland Raiders meet Sunday in NFL action at the Oakland Coliseum.

The Oakland Raiders look to play spoiler at this point after losing six of their last seven games. The Oakland Raiders have lost three of their last four true home games. Derek Carr is completing 68.5 percent of his passes for 2,827 yards, 13 touchdowns and eight interceptions. Carr has one or less touchdown passes in eight of his last 11 games. Jared Cook and Jalen Richard have combined for 1,056 receiving yards and five touchdowns while Jordy Nelson has 25 receptions. The Oakland Raiders ground game is averaging 99.4 yards per contest, and Doug Martin leads the way with 384 yards and one touchdown. Defensively, Oakland is allowing 29.7 points and 390 yards per game. Tahir Whitehead leads the Oakland Raiders with 87 tackles, Maurice Hurst has four sacks and Gareon Conley has two interceptions.

The Kansas City Chiefs have had extra time to prepare for this game, but you have to question how the loss of Kareem Hunt is going to impact not only the offense but also the team overall in terms of distractions. The Oakland Raiders continue to be a joke of a football team and each of their last six losses have been decided by double digits. The Kansas City Chiefs have failed to cover four of their last five games as a double-digit favorite. The Oakland Raiders have failed to cover five of their last seven games as a double-digit underdog. It's risky to lay this many points with a Chiefs team that just lost their only real running back, a guy who was going to the Pro Bowl for a second season. However, backing the Raiders at any point in their current form and with all the issues they have off the field isn't an option. So, if forced to pick, I'll take Kansas City in a beatdown.