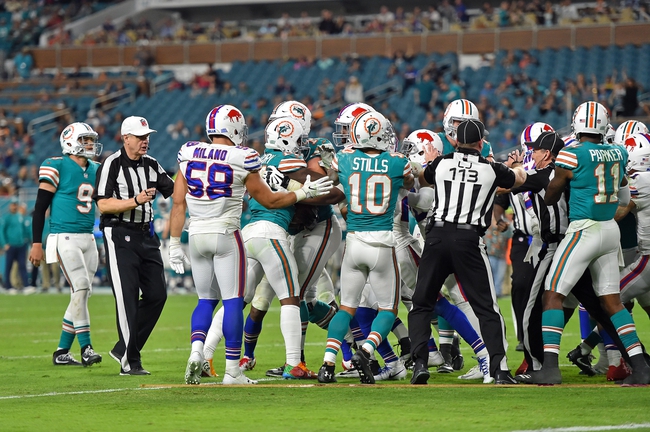 The Buffalo Bills look for a third straight victory to build positive momentum heading into the offseason. The Buffalo Bills have lost four of their last six road games. Josh Allen is completing 52.5 percent of his passes for 992 yards, three touchdowns and five interceptions. Allen has 19 pass attempts under his belt since the month of November. Zay Jones and Kelvin Benjamin have combined for 726 receiving yards and three touchdowns while Robert Foster has seven receptions. The Buffalo Bills ground game is averaging 114.1 yards per contest, and LeSean McCoy leads the way with 426 yards and two touchdowns. Defensively, Buffalo is allowing 24.7 points and 305 yards per game. Tremaine Edmunds leads the Buffalo Bills with 78 tackles, Jerry Hughes has six sacks and Jordan Poyer has three interceptions.

The Miami Dolphins could use a win here in hopes of saving their season after losing six of their last eight games. The Miami Dolphins have won four of their last five home games. Ryan Tannehill is completing 66.2 percent of his passes for 1,176 yards, 10 touchdowns and five interceptions. Brock Osweiler and Ryan Tannehill have combined for 16 touchdown passes and nine interceptions this season. Danny Amendola and Kenny Stills have combined for 801 receiving yards and five touchdowns while Kenyan Drake has 38 receptions. The Miami Dolphins ground game is averaging 106.5 yards per contest, and Frank Gore leads the way with 595 yards on 131 carries. Defensively, Miami is allowing 25.7 points and 398 yards per game. Kiko Alonso leads the Miami Dolphins with 95 tackles, Cameron Wake has 4.5 sacks and Xavien Howard has five interceptions.

The Buffalo Bills are all of a sudden playing some decent football, as they've won their last two games and the defense has given up an average of 15.5 points in those two victories. The Miami Dolphins are coming off a bad loss to the Indianapolis Colts, as they had a double-digit lead in the fourth quarter, and they've now allowed 27 or more points in seven of their last eight games overall. The Buffalo Bills have split their last 12 games ATS when an underdog of at least three points. The Miami Dolphins are 3-3-2 ATS in their last eight games when a favorite of at least three points. The Bills are still a bad football team and wins over the New York Jets & Jacksonville Jagaurs doesn't move the needle a whole lot for me. The Miami Dolphins could easily throw the season away after such a brutal loss and Adam Gase showing no confidence in his offense. However, the Dolphins have been consistent at home the last two years and three of their four home wins this season have been won by at least seven points. I'll take Miami by a touchdown.