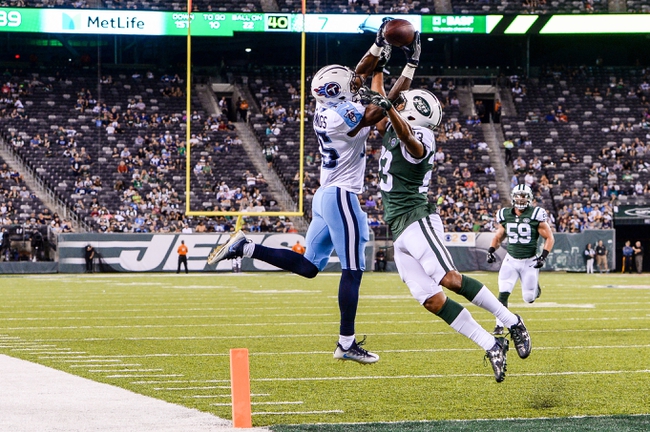 The New York Jets and the Tennessee Titans will meet up on Sunday in Week 13 NFL action.

The Jets come into this one at 3-8 on the year so far. New York hasn’t won a game in a while, though; they’ve fallen to the Vikings, Bears, Dolphins, Bills and Patriots in their last five games.

In the Patriots game, New York QB Josh McCown finished with 276 yards one TD and a pick while Isaiah Crowell logged 30 yards on six carries. Quincy Enunwa was the Jets’ lead receiver on 73 yards from four grabs.

Over on the Titans side, they’re 5-6 on the season. Over their last four, Tennessee was able to take out the Cowboys and Patriots but fell to Indianapolis and Houston.

In the Texans loss, Tennessee QB Marcus Mariota logged 303 yards and two touchdowns, while Corey Davis’ 39-yard run made him the team’s lead rusher. Davis was also the leading receiver for the Titans on 96 yards from four catches.

This was always going to be another “rebuilding year” for the Jets, and they’ll look a lot different next season under a new regime. Still, New York does have some talent at the skill positions, and so long as the line is sitting at a touchdown or above, I’m on board with the Jets covering here against a mediocre Titans team.