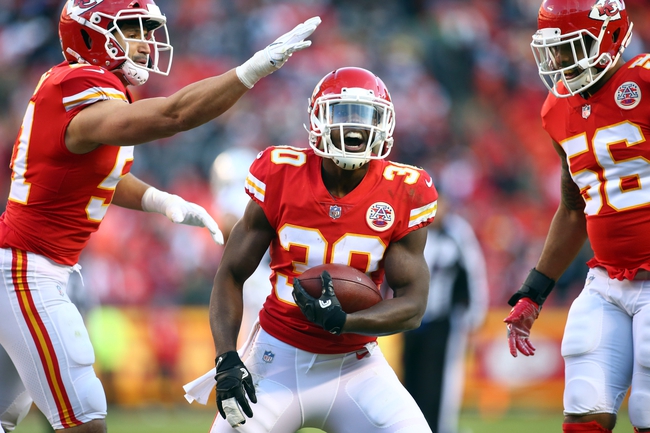 The Kansas City Chiefs and the Oakland Raiders meet up for a week 13 AFC West division showdown from the Oakland Coliseum on Sunday afternoon.

The Kansas City Chiefs have had an extra week to prepare after their bye week following a 54-51 loss to the Los Angeles Rams in their last outing, giving the Chiefs the dubious distinction of being the first team in NFL history to score 50+ points in a game and lose. Patrick Mahomes has thrown for 3,628 yards, 37 touchdowns and 10 interceptions on 67.5% passing while Kareem Hunt has rushed for 824 yards and 7 touchdowns this season. Tyreek Hill leads the Chiefs with 1,106 yards and 11 touchdowns while Travis Kelce has a team-high 67 catches for 914 yards and 7 touchdowns. Defensively, Dee Ford and Chris Jones are tied for the team-high with 9 sacks while Anthony Hitchens has a team-high 55 tackles this season. As a team, Kansas City is averaging 434.3 yards of total offense while boasting the 2nd-highest scoring offense this season with 36.7 points per game this season.

The Oakland Raiders will look to pull off an upset at home after falling to 2-9 after a 34-17 loss to Baltimore in their last outing. Derek Carr has thrown for 2,827 yards, 13 touchdowns and 8 interceptions on 68.3% passing while Doug Martin leads Oakland in rushing with 384 yards on the ground this season. Jared Cook leads the Raiders with 609 receiving yards and 5 touchdowns while Jalen Richard has a team-high 53 receptions for 447 yards this year. Defensively, Maurice Hurst Jr. leads the Raiders with 4 sacks while Tahir Whitehead leads Oakland with 61 tackles this season. As a team, Oakland is averaging 338.3 yards of total offense and 17 points per game this season.

There’s certain things I’ve learned not to do in sports, one of them being not to bet against Andy Reid after a bye week. Teams coached by Reid are a ridiculous 16-3 SU following a bye week, and this is arguably the most loaded team Reid has had up to this point, and are fresh off of a game where they scored 51 and still lost. I’m chalking that up to the defense on the other side however. My concern for Oakland is that even at home, the offense won’t be able to keep up. Oakland has scored 20 or more points in just 4 of their 11 games this season, while KC hasn’t scored less than 26 points in any game this season. It’s a really thick line for a road favorite, but I don’t see any other choice than to lay the points with Kansas City here.