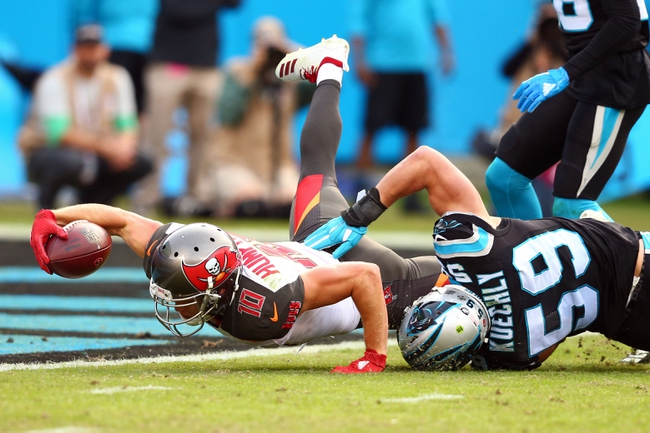 The Carolina Panthers and the Tampa Bay Buccaneers will be meeting up in NFL action on Sunday from Raymond James Stadium.

Carolina comes into this game with a 6-5 record overall. The Panthers opened up at 6-2, but they’ve lost their last three games versus the Steelers, Lions and Seahawks.

In the Seattle game, Panthers QB Cam Newton put up 256 yards, two TDs and a pick, and Christian McCaffrey led the rush on 125 yards and a TD. McCaffrey was also the lead Carolina receiver with 112 yards and a TD off 11 catches.

Over on the Bucs side, they’re 4-7 this season. Tampa kicked things off with a pair of really nice wins, but have gone just 2-7 since then and halted a four-game losing streak against the 49ers last week.

In the Niners game, Bucs QB Jameis Winston put up 312 yards and two scores, and Peyton Barber led the rush with 47 yards and a TD. Mike Evans led the Tampa receivers on 116 yards from six grabs.

Carolina isn’t quite as feared as they were a month or so ago thanks to this losing streak, but the good news is that their last two defeats have come by just four combined points.

As for the Bucs, they’ve shown a couple of flashes here and there but aren’t doing much else these days.

The last time these two met was a 42-28 Panthers win, and I don’t think this will be too different. I’m going Carolina.