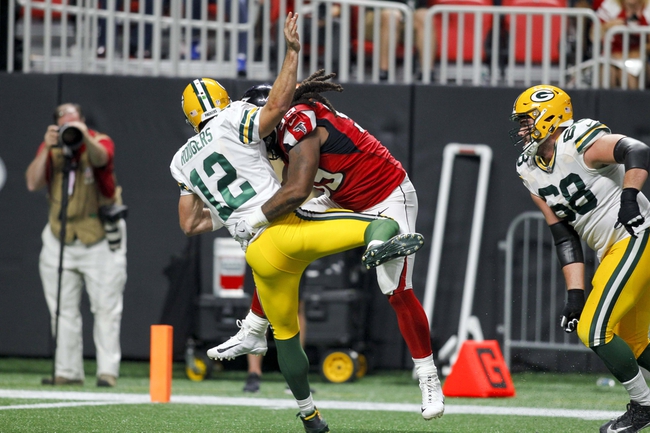 The Atlanta Falcons and the Green Bay Packers meet in week 14 NFL action from Lambeau Field on Sunday afternoon.

The Atlanta Falcons will look for a win to snap a 4-game losing streak after a 26-16 loss to Baltimore in their last outing. Matt Ryan has thrown for 3,814 yards, 25 touchdowns and 5 interceptions while Tevin Coleman leads Atlanta on the ground with 514 rushing yards this season. Julio Jones has 86 catches for 1,323 yards and 3 touchdowns while Calvin Ridley has 50 catches for 647 yards and 8 touchdowns this season. Defensively, Takkarist McKinley leads Atlanta with 6 sacks while De’Vondre Campbell leads the Falcons with 50 tackles this year. As a team, Atlanta is averaging 377.6 yards of total offense and 24.7 points per game this season.

The Green Bay Packers will look to rebound after losing 3 straight and 5 of their last 6 games after a 20-17 loss to Arizona in their last outing. Aaron Rodgers has thrown for 3,504 yards, 21 touchdowns and 1 interception on 61.8% passing while Aaron Jones leads Green Bay in rushing with 642 yards and 7 touchdowns this season. Davante Adams leads Green Bay with 85 catches for 1,115 yards and 11 touchdowns while Jimmy Graham has 44 receptions for 536 yards this season. Defensively, Kyler Fackrell leads the Packers with 8 sacks while Kenny Clark has 6 sacks and Blake Martinez has 4 sacks and 65 tackles this season. As a team, Green Bay is averaging 380.6 yards of total offense and 23.4 points per game this season.

Green Bay has one of the best of all-time in Aaron Rodgers, but there were rumors of some dissention on the offensive side with former head coach Mike McCarthy and Rodgers, so who knows what we will see from the Packers and their new coaching staff this week. Atlanta has a just-as-capable Matt Ryan on their sideline and a couple of solid receivers in Julio Jones and Calvin Ridley, and I feel safer taking the points with Atlanta who have the same level talent and fewer question marks so I’ll back the Falcons here.