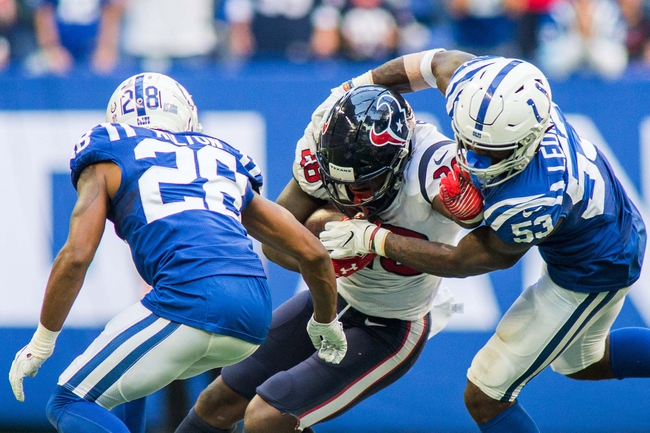 The Indianapolis Colts and the Houston Texans will meet up in Week 14 NFL activity on Sunday.

The Colts enter this one at 6-6 on the season. Indianapolis had a nice win streak going, taking out the Bills, Raiders, Jaguars, Titans and Dolphins, but lost their last matchup versus Jacksonville 6-0.

In the Jags game, Indy QB Andrew Luck put up 248 yards with a pick, and Marlon Mack led a dismal rush with 27 yards on eight carries. Eric Ebron had a solid line, leading the Colts receivers on 10 catches for 81 yards.

Over on the Texans’ side, they’re currently 9-3 on the year. Houston stumbled out of the gate 0-3, then rattled off wins over the Colts, Cowboys, Bills, Jags, Dolphins, Broncos, Redskins, Titans and Browns.

In the Browns game, Houston QB Deshaun Watson threw for 224 yards and a TD, while Lamar Miller led the rush on 103 yards. DeAndre Hopkins was the lead Texans receiver with 91 yards on seven grabs.

I really don’t know what to say about the Colts’ 6-0 loss to Jacksonville this past Sunday. It was a complete mess from top to bottom, and featured an incredibly questionable out-of-bounds call at the end of the game that squashed Indy’s hopes at a comeback.

As for the Texans, they’re sitting pretty right now and this is the opportunity for the team to take control of the division in a decisive manner. I expect a hard-fought game with Houston covering a reeling Colts team—but it’ll be great fun to watch. Give me the Texans.