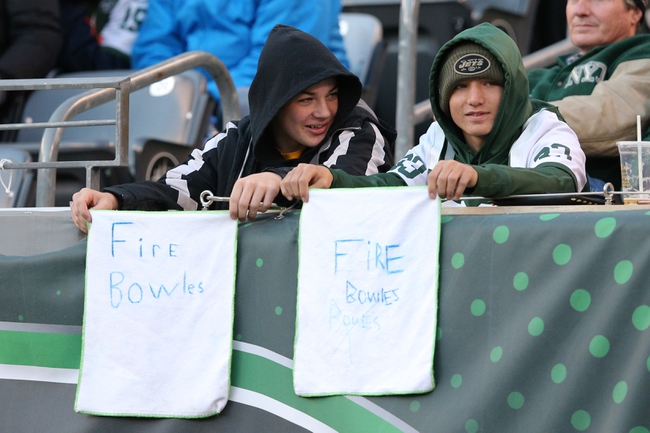 The New York Jets could use a feel good victory here to snap a six-game losing streak. The New York Jets have lost each of their last five road games. Josh McCown is completing 55 percent of his passes for 539 yards, one touchdown and four interceptions. McCown and Sam Darnold have combined for 12 touchdown passes and 18 interceptions this season. Quincy Enunwa and Robby Anderson have combined for 843 receiving yards and four touchdowns while Chris Herndon has 28 receptions. The New York Jets ground game is averaging 108.6 yards per contest, and Isaiah Crowell leads the way with 680 yards and six touchdowns. Defensively, New York is allowing 25.6 points and 376.4 yards per game. Avery Williamson leads the New York Jets with 98 tackles, Jordan Jenkins has six sacks and Darron Lee has three interceptions.

The Buffalo Bills could also use a nice home victory to rebound after losing five of their last seven games. The Buffalo Bills have split their last four home games. Josh Allen is completing 52.9 percent of his passes for 1,223 yards, five touchdowns and seven interceptions. Allen has three touchdown passes on his last 52 pass attempts. Zay Jones and Robert Foster have combined for 715 receiving yards and five touchdowns while LeSean McCoy has 29 receptions. The Buffalo Bills ground game is averaging 121.1 yards per contest, and McCoy leads the way with 478 yards and two touchdowns. Defensively, Buffalo is allowing 24.4 points and 294.2 yards per game. Tremaine Edmunds leads the Buffalo Bills with 82 tackles, Lorenzo Alexander has 6.5 sacks and Jordan Poyer has three interceptions.

The New York Jets haven't won a game in nearly two months and five of their last seven losses have been decided by double digits. The Buffalo Bills would have beaten the Miami Dolphins last week if Charles Clay knew how to catch, which would have been three straight wins for this team. The New York Jets have failed to cover eight of their last 10 games when an underdog of at least three points. The Buffalo Bills are 3-1-1 ATS in their last five games when a favorite of at least three points. Despite both losing records, it's the Bills who are playing better football, and Allen is starting to make big time strides. The New York Jets are in full tank mode with their backup quarterback, as a top-five pick does more than a meaningless victory in Buffalo. I'll eat the chalk with the Bills, a team still playing hard and trying to finish the year on a high note.