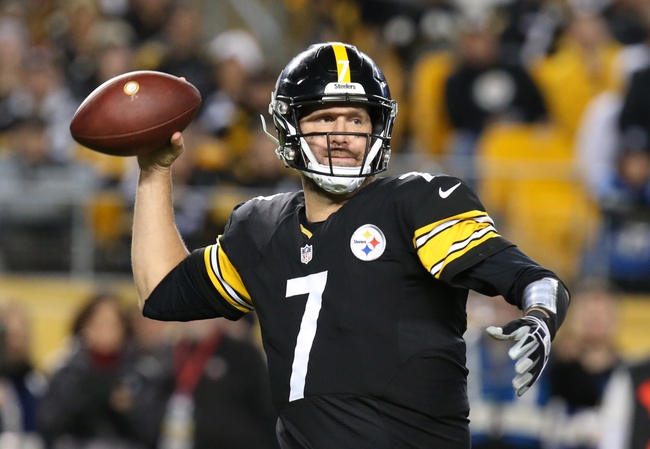 The Pittsburgh Steelers and the Oakland Raiders meet in week 14 NFL action from the Oakland Coliseum on Sunday afternoon.

The Pittsburgh Steelers will look to bounce back after letting one slip away in their last outing, falling to 7-4-1 with a 33-30 loss to the Los Angeles Chargers, marking the first time in franchise history where the Steelers lost after leading at home by at least 14 points. Ben Roethlisberger has thrown for 3,945 yards, 26 touchdowns and 13 interceptions on 66% passing while James Conner has rushed for 909 yards and 12 touchdowns this season. JuJu Smith-Schuster leads Pittsburgh’s receiving corps with 83 grabs for 1,104 yards with 4 touchdowns while Antonio Brown has 81 catches for 1,028 yards and 12 scores this season. Defensively, T.J. Watt leads the Steelers with 10 sacks while Sean Davis leads the Steelers with 48 tackles this season. As a team, Pittsburgh is averaging 413.8 yards of total offense and 28.8 points per game this season.

The Oakland Raiders will be looking to pick up a confidence win after falling to 2-10 on the year following a 40-33 loss to Kansas City in their last outing. Derek Carr has thrown for 3,112 yards, 16 touchdowns and 8 interceptions on 69% passing while Doug Martin has rushed for 445 yards and a pair of touchdowns this season. Jalen Cook leads Oakland’s receiving corps with 709 receiving yards and 6 touchdowns while Jalen Richard has a team-high 56 catches for 478 yards and Jordy Nelson has 35 grabs for 450 yards and 3 TDs this season. Defensively, Maurice Hurst Jr. leads Oakland with 4 sacks while Tahir Whitehead leads the Raiders with 68 tackles this season. As a team, Oakland is averaging 346.9 yards of total offense and 18.3 points per game this season.

Oakland looked pretty good for once against the Chiefs, but if we’re being honest, Kansas City isn’t very good defensively and the Steelers, despite not having as good of a record as KC, is still a solid defensive unit. The Steelers are also in a dogfight for their division with their tie being the lone thing separating Pittsburgh from the Ravens (7-5) in the division standings. However, each of the last 3 meetings between these two teams have been decided by 3 points, and while Oakland was a much better team in each of those games, I think the Raiders can hang around in front of their home fans and keep this one respectable so while I think Pittsburgh wins, I think Oakland covers.