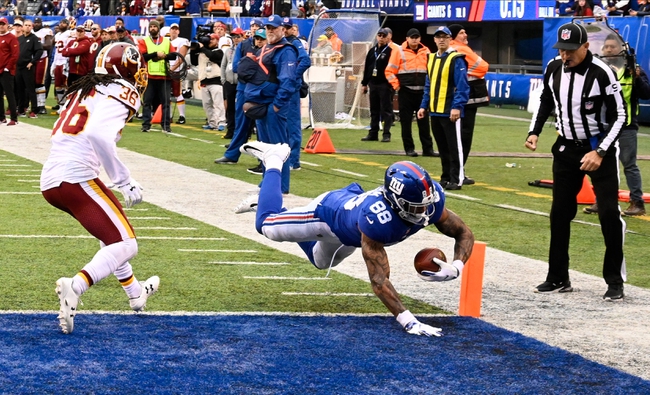 The New York Giants look for another victory after winning three of their last four games. The New York Giants have lost four of their last six road games. Eli Manning is completing 67.9 percent of his passes for 3,263 yards, 15 touchdowns and eight interceptions. Manning has one or less touchdown passes in eight of his last 11 games. Odell Beckham Jr. and Sterling Shepard have combined for 1,690 receiving yards and nine touchdowns while Saquon Barkley has 74 receptions. The New York Giants ground game is averaging 95.8 yards per contest, and Barkley leads the way with 954 yards and eight touchdowns. Defensively, New York is allowing 26.3 points and 377.7 yards per game. Landon Collins leads the New York Giants with 96 tackles, B.J. Hill has five sacks and Alec Ogletree has four interceptions.

The Washington Redskins need a win here to snap a three-game losing streak while getting a game above a .500 record while staying in the NFC playoff race. The Washington Redskins have split their last six home games. Mark Sanchez is completing 61.9 percent of his passes for 100 yards, zero touchdowns and one interception. Sanchez is expected to make his first start since the 2015 season when he was with the Philadelphia Eagles. Jordan Reed and Josh Doctson have combined for 943 receiving yards and four touchdowns while Vernon Davis has 19 receptions. The Washington Redskins ground game is averaging 117.7 yards per contest, and Adrian Peterson leads the way with 856 yards and seven touchdowns. Defensively, Washington is allowing 21.4 points and 367.4 yards per game. Mason Foster leads the Washington Redskins with 97 tackles, Ryan Kerrigan has eight sacks and D.J. Swearinger has four interceptions.

The New York Giants have found the formula to victories over the last month, but it's too little too late. If only some of those close games went in favor of the Giants earlier in the season, they would be thinking playoffs right now. The Washington Redskins went from NFC East favorites to likely not making the postseason, especially with their backup quarterback Colt McCoy breaking his leg Monday night against the Eagles. The New York Giants have covered four of their last five games when an underdog of any kind. The Washington Redskins have failed to cover three of their last four games when a favorite of any kind. The Redskins being favored against the Giants when McCoy was starting was laughable. Mark Sanchez? No. Sanchez hasn't started a game in three years and looked lost Monday night where he struggled to complete even the simple passes. Even with all of the issues the Giants have, they should win this game on the road simply due to facing a third string quarterback. ...