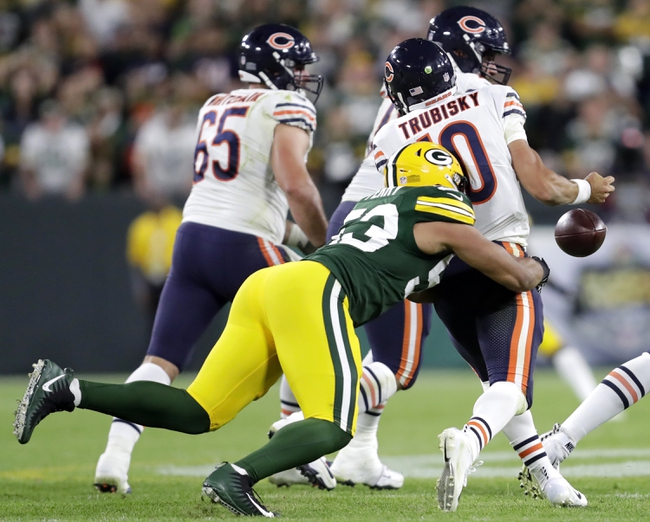 The Green Bay Packers and the Chicago Bears meet in a pivotal week 15 NFC North division tilt in NFL action from Soldier Field on Sunday afternoon.

The Green Bay Packers will look to build some steam after a 34-20 win over the Atlanta Falcons in their last outing. Aaron Rodgers has thrown for 3,700 yards, 23 touchdowns and 1 interception on 62% passing while Aaron Jones has rushed for 720 yards and 8 touchdowns this season. Davante Adams far and away leads Green Bay’s receiving group with 92 catches for 1,196 yards and 12 touchdowns. Defensively, Kyler Fackrell leads the Packers with 8 sacks and Kenny Clark has 6 sacks while Blake Martinez has 4 sacks and a team-high 76 tackles this season. As a team, Green Bay is averaging 374.4 yards of total offense and 24.2 points per game this season.

The Chicago Bears will look for a win to by all intents and purposes lock up their division after improving to 9-4 with a 15-6 win over the Los Angeles Rams in their last outing. Mitch Trubisky has thrown for 2,579 yards, 21 touchdowns and 12 interceptions on 64.4% passing while Jordan Howard leads Chicago in rushing with 713 yards and 5 touchdowns this season. Tarik Cohen leads the Bears in receiving with 63 catches for 679 yards and 4 touchdowns while allen Robinson II has 615 yards and 4 TDs and Taylor Gabriel has 57 receptions for 566 yards this season. Defensively, Khalil Mack leads the Bears with 10 sacks while Akiem Hicks has 6 sacks and Roquan Smith has added 4 sacks and a team-high 73 tackles this season. As a team, Chicago is averaging 347.2 yards of total offense and 27.6 points per game this season. The Bears are also tough defensively, sitting 3rd in the NFL in total offense against with 309.9 YPG against and 19 points against per game this season.

The Green Bay Packers have quite frankly owned the Bears over the past few years, but the Packers also haven’t had these kinds of struggles, at least not from what I’ve seen. Green Bay has lost all 6 of their road games so far and are only 1-5 ATS on the road this season. That won’t cut it, even with one of the greatest quarterbacks of all time on your side, when going against a Chicago team that’s found a groove for the better part of this season and just held one of the league’s best offensive units to just 6 points. Chicago has made Soldier Field a fortress over the last couple of years, and as such, I think the Bears come out with a statement win here, so I’ll lay the points with Chicago in this spot.