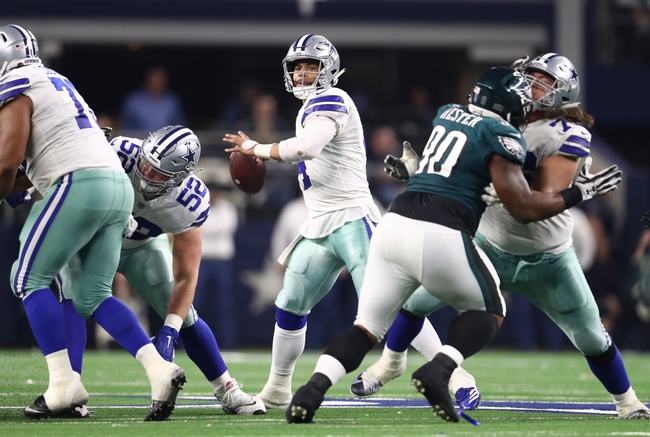 The Dallas Cowboys and the Indianapolis Colts meet in week 15 NFL action from Lucas Oil Stadium on Sunday afternoon.

The Dallas Cowboys will be looking to take one step closer to locking up a division title after their 5th straight win coming in the form of a 29-23 overtime win over Philadelphia last time out. Dak Prescott has thrown for 3,131 yards, 17 touchdowns and 7 interceptions while Ezekiel Elliott leads the Cowboys on the ground with 1,262 yards and 6 rushing touchdowns this season. Amari Cooper leads Dallas’ receiving corps with 642 yards and 6 touchdowns while the aforementioned Elliott has a team-high 65 catches for 502 yards and 3 touchdowns. Defensively, Demarcus Lawrence leads the Cowboys with 9.5 sacks while Leighton Vander Esch has a team-high 82 tackles this season. As a team, Dallas is averaging 350.6 yards of total offense and 21.2 points per game this season.

The Indianapolis Colts come into this game looking to build on 6 wins in 7 games after a key 24-21 win over the Houston Texans in their last outing. Andrew Luck has thrown for 3,759 yards, 34 touchdowns and 13 interceptions while Marlon Mack leads the Colts on the ground with 616 rushing yards and 5 touchdowns. T.Y. Hilton leads the Colts with 62 receptions for 986 yards with 6 touchdowns while Eric Ebron added 58 catches for 654 yards and 12 touchdown grabs this season. Defensively, Denico Autry leads the Colts with 8 sacks while Darius Leonard has 7 sacks and a team-high 90 tackles this season. As a team, Indianapolis is averaging 382.4 yards of total offense and 26.8 points per game this season.

The home team has had the bulk of the success in this matchup, so I can understand why laying the points and taking the Colts at home would make sense. However, the Cowboys have completely turned their season around and while Luck has an edge over Prescott in my opinion, the Cowboys have a distinct advantage in the run game and on defense. The Colts need this game for the wild-card hunt, but the Cowboys can almost virtually lock up their division with a win here. The difference for me is that the Cowboys have been money ATS over the last month or so, while the Colts have had issues against the spread following up on a win, so I’ll take the free field goal with Dallas in this one.