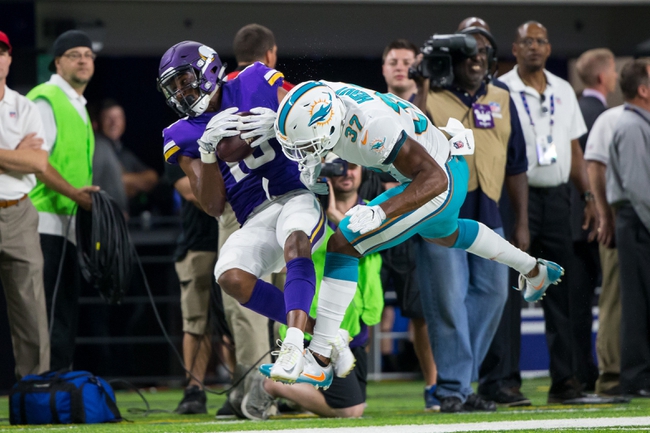 The Miami Dolphins and the Minnesota Vikings meet in week 15 NFL action from U.S. Bank Stadium on Sunday afternoon.

The Miami Dolphins will be looking to keep their playoff push on after improving to 7-6 with a last-second 34-33 win over New England in their last outing. Ryan Tannehill has thrown for 1,578 yards, 16 touchdowns and 6 interceptions on 67% passing while Frank Gore has rushed for a Miami-leading 708 yards and Kenyan Drake has rushed for 463 yards and 4 touchdowns this season. Kenny Stills leads Miami with 504 yards and 6 touchdowns receiving with Danny Amendola has a Miami-high 49 catches for 479 yards this season. Defensively, Robert Quinn and Cameron Wake are tied for the team lead with 4.5 sacks each while Kiko Alonso has a Dolphins-high 76 tackles this season. As a team, Miami is averaging 310.5 yards of total offense and 21.4 points per game this season.

The Minnesota Vikings will be looking to bounce back after a 21-7 loss to the Seattle Seahawks in their last outing. Kirk Cousins has thrown for 3,698 yards, 24 touchdowns and 9 interceptions on 70.6% passing while Latavius Murray leads Minnesota in rushing with 470 rushing yards and 5 touchdowns and Dalvin Cook has 367 yards this season. Adam Thielen leads the Vikings’ receiving group with 103 catches for 1,236 yards and 9 touchdowns while Stefon Diggs has 88 receptions for 915 yards and 6 TDs. Defensively, Danielle Hunter leads the Vikings with 12.5 sacks while Harrison Smith has 3 interceptions and Eric Kendricks leads the Vikings with 59 tackles this season. As a team, Minnesota is averaging 354.4 yards of total offense and 21.7 points per game this season.

It’s no secret that the Dolphins are a better team at home than they are on the road, but something about that win last week with no time left on the clock has to do something for Miami’s confidence in the playoff hunt. The Vikings are not only on a shorter week, but for the majority of the game against Seattle, the Vikings just could find a way to put points on the board. I think Miami can ride their momentum to at least keep this one within a touchdown, so I’ll take the Dolphins and the points here.