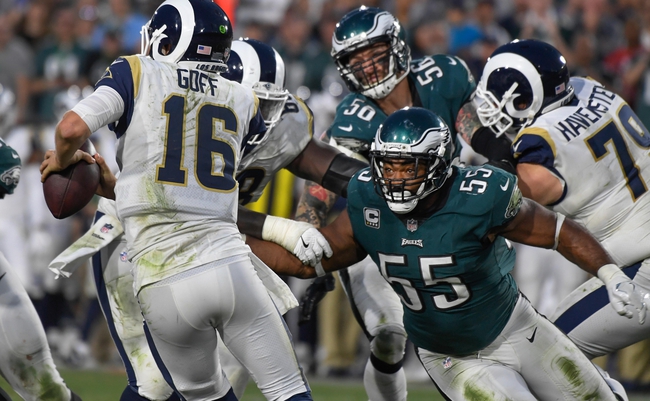 The Los Angeles Rams will look to continue their pursuit of home field throughout the playoffs but had a misstep in their last outing, falling by a final score of 15-6 at the hands of Chicago in their last outing. Jared Goff has thrown for 3,934 yards, 27 touchdowns and 11 interceptions while Todd Gurley has rushed for 1,203 yards and 15 touchdowns this year. Brandin Cooks leads L.A. with 1,048 yards and 3 touchdown grabs on 66 catches while Robert Woods has a team-high 71 receptions for 1,032 yards and 5 touchdowns. Defensively, Aaron Donald leads not only the Rams but the entire NFL with 16.5 sacks this season while Cory Littleton leads L.A. with 74 tackles this year. As a team, Los Angeles is averaging 422.5 yards of total offense and 32.7 points per game this season.

The Eagles have flat out owned the Rams over the years, and with the Rams looking human last week, the points hold some value on the surface. However, there’s word that came out that Wentz won’t be playing in this game due to back soreness, and that the Eagles could be shutting Wentz down for the season, and if that’s the case, I’m not sure how confident I am in the Eagles hanging around here. Sure, Philadelphia’s got Nick Foles, who led the Eagles to a Super Bowl title last season, but stepping in after 13-14 weeks on the bench and having to go shot-for-shot with one of the league’s best offensive units isn’t an enviable task. I think the Rams bounce back in a big way here, so I’ll side with the Rams and lay the points in this one.