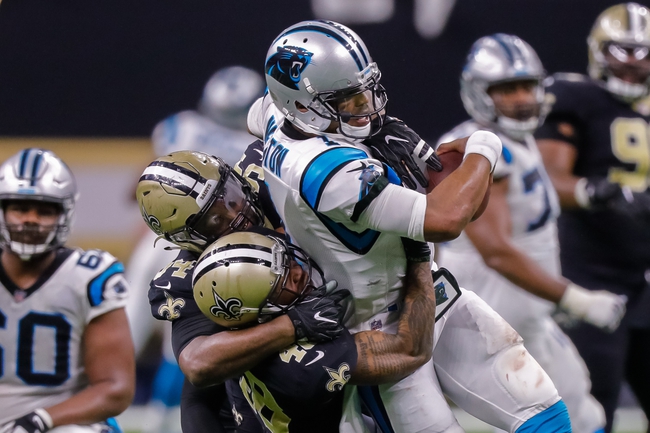 The New Orleans Saints and the Carolina Panthers meet in week 15 NFL action from Bank of America Stadium on Monday night football.

The New Orleans Saints will be looking to build off of a 28-14 win over Tampa Bay in their last outing to clinch their division with an 11-2 record. Drew Brees has thrown for 3,463 yards, 31 touchdowns and 4 interceptions while Alvin Kamara has rushed for 793 yards and 11 touchdowns and Mark Ingram has rushed for 519 yards and 5 touchdowns. Michael Thomas leads the Saints’ receiving corps with 102 receptions for 1,218 yards and 8 touchdowns while Kamara has 70 grabs for 591 yards and 8 touchdowns out of the backfield. Defensively, Cameron Jordan leads New Orleans with 12 sacks while Demario Davis leads New Orleans with 66 tackles this season. As a team, New Orleans is averaging 389 yards of total offense and 34.4 points per game, the 2nd-highest scoring offense in the league this season.

The Carolina Panthers will look for a win to get back to .500 after a 26-20 loss to Cleveland in their last outing. Cam Newton has thrown for 3,264 yards, 24 touchdowns and 12 interceptions on 68.8% passing while Christian McCaffrey leads the Panthers in rushing with 926 yards and 7 touchdowns this season. McCaffrey also leads Carolina’s receiving corps with 86 catches for 701 yards and 6 touchdowns while DJ Moore has 47 catches for 676 yards and Devin Funchess has 42 grabs for 526 yards this season. Defensively, Mario Addison leads Carolina with 8 sacks while Luke Kuechly has a team-high 77 tackles this season. As a team, Carolina is averaging 378.1 yards of total offense and 24.9 points per game this season.

The points hold some weight given that Carolina has been pretty good at home this season. However, the Panthers have been brutal over the last month ATS, are falling out of the playoff race and now put themselves in a must-win situation against one of the best offensive units in the league this season. The Saints have “cooled off” over the last couple of weeks are their strong outputs so far this season, but they’re still the more consistent team of the two and have had the bulk of the success over the last few seasons in this matchup. Plus, the Saints are now in a fight for home field throughout the playoffs after the Rams slipped up in Chicago, so I’ll side with New Orleans to win this one by at least a touchdown.