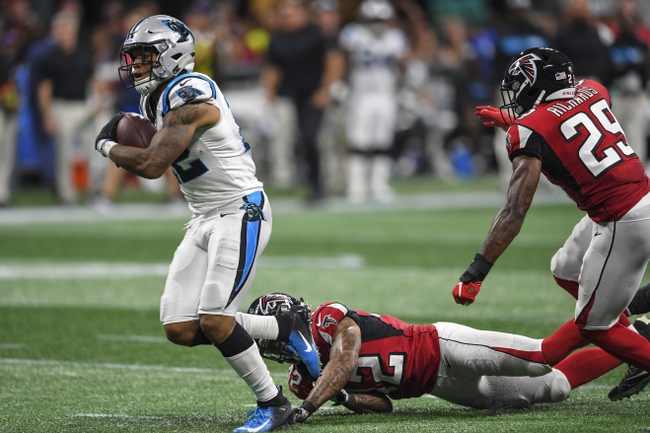 The Atlanta Falcons and Carolina Panthers meet Sunday in NFL action at Bank of America Stadium.

The Atlanta Falcons have a chance at back-to-back victories for the first time in over a month. The Atlanta Falcons have lost five of their last six road games. Matt Ryan is completing 69.9 percent of his passes for 4,307 yards, 30 touchdowns and six interceptions. Ryan has two or more touchdown passes in six of his last nine games. Julio Jones and Calvin Ridley have combined for 2,210 receiving yards and 14 touchdowns while Mohamed Sanu has 54 receptions. The Atlanta Falcons ground game is averaging 90.7 yards per contest, and Tevin Coleman leads the way with 704 yards and three touchdowns. Defensively, Atlanta is allowing 27.2 points and 377.4 yards per game. Foye Oluokun leads the Atlanta Falcons with 79 tackles, Grady Jarrett has six sacks and Damontae Kazee has six interceptions.

The Carolina Panthers could use a victory here that would snap a brutal six-game losing streak. The Carolina Panthers have won five of their last seven home games. Taylor Heinicke is completing 50 percent of his passes for 46 yards, zero touchdowns and zero interceptions. Heinicke enters this game in replace of an injured Cam Newton, and he has five career pass attempts under his belt. Christian McCaffrey and DJ Moore have combined for 1,456 receiving yards and eight touchdowns while Devin Funchess has 42 receptions. The Carolina Panthers ground game is averaging 134.6 yards per contest, and McCaffrey leads the way with 979 yards and seven touchdowns. Defensively, Carolina is allowing 24.6 points and 352.1 yards per game. Luke Kuechly leads the Carolina Panthers with 124 tackles, Mario Addison has eight sacks and Donte Jackson has four interceptions.

The Atlanta Falcons are fresh off a blowout win over the Arizona Cardinals, but now they go on the road where they've been outscored by an average of 13.3 points in their last three tries. The Carolina Panthers may have lost six straight games, but their last five losses have come by an average of four points, so things could be completely different for this team with a bounce here or a bounce there. The Atlanta Falcons have failed to cover four of their last six games as a favorite of at least three points. The Carolina Panthers have split their last eight games ATS as an underdog of at least three points. The Panthers have kept games close and are a veteran prideful bunch that will want to go with a win in their last home game, but I'm not backing a quarterback who has five career pass attempts. Even a horrible Falcons defense should have the edge in this game. I'll lay the field goal with the Falcons, even if it's a fade from the Panthers and Heinicke's inexperience.