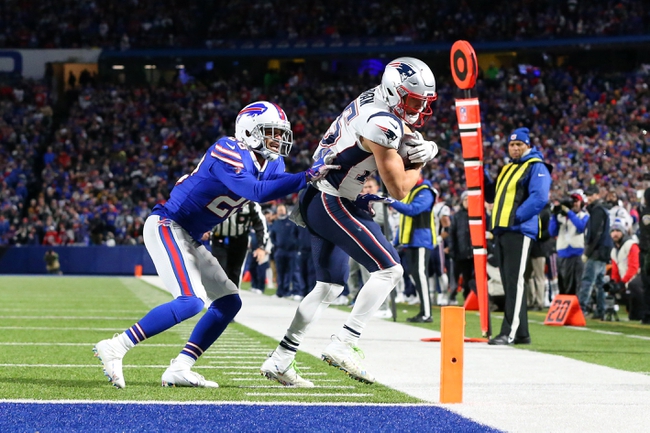 The Buffalo Bills and the New England Patriots meet in a week 16 AFC East division matchup from Gillette Stadium on Sunday afternoon.

The Buffalo Bills come into this game looking to build on a 14-13 win over Detroit in their last outing. Josh Allen has thrown for 1,633 yards, 6 touchdowns and 9 interceptions on 52.2% passing while also leading Buffalo in rushing with 506 rushing yards and 6 touchdowns this season. Zay Jones leads Buffalo’s receiving group with 45 catches for 492 yards and 4 touchdowns while Robert Foster has 468 receiving yards this season. Defensively, Lorenzo Alexander leads the Bills with 6.5 sacks and Jerry Hughes has 6 sacks while Tremaine Edmunds leads the Bills with 66 tackles on the year. As a team, Buffalo is averaging 293.4 yards of total offense and 15.4 points per game this season.

The New England Patriots will be looking to rebound from back-to-back losses after a 17-10 loss to Pittsburgh in their last outing. Tom Brady has thrown for 3,979 yards, 24 touchdowns and 9 interceptions on 65.9% passing while Sony Michel leads the Pats on the ground with 765 rushing yards and 5 touchdowns and James White has rushed for 354 yards and 4 touchdowns. Julian Edelman has 63 catches for 711 yards while the aforementioned White has a team-high 81 catches for 699 yards and a team-high 6 touchdowns. Rob Gronkowski also has 45 grabs for 658 yards this season. Defensively, Trey Flowers leads the Patriots with 6.5 sacks while Devin McCourty has a team-high 57 tackles this season. As a team, New England is averaging 395 yards of total offense and 26.7 points per game this season.

You could make a case for the Bills and the points, as Buffalo has shown some signs of improvement here and there, and Allen looks comfortable as an NFL QB. It’s also hard for New England to cover a two-touchdown spread when the offense has issues putting up 10 points like they did against the Steelers and now New England has lost this season’s top receiver in Josh Gordon to more off-field issues. However, there are things that are pretty much certain in life, death, taxes, and Tom Brady owning the Buffalo Bills. Brady is 29-3 SU in his career against Buffalo, and New England has won the last 4 meetings between the two teams by an average of 18.5 points per game. I’m as hesitant as anyone right now when it comes to the thought of laying a heavy line with New England especially with Josh Gordon gone, but if there was a time for them to cover it, it would be now so I’ll lay the points with New England here.