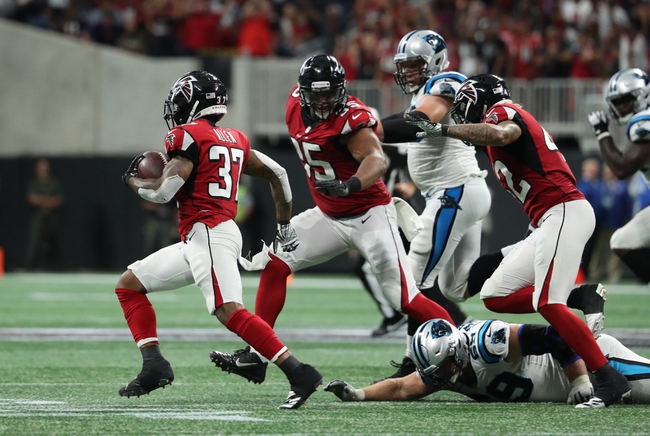 The Atlanta Falcons and the Carolina Panthers will face off in Week 16 NFL action on Sunday.

The Falcons roll into this one at 5-9 on the year. Atlanta had a losing streak going versus the Browns, Cowboys, Saints, Ravens and Packers but got a win their last time out with a 40-14 result versus Arizona.

In the win over the Cards, Atlanta QB Matt Ryan put up 231 yards and two scores, and Tevin Coleman had 145 yards with one TD rushing. Julio Jones led the receivers for the Falcons on 82 yards and a score from six catches.

Over on the Panthers’ side, they’re 6-8 on the season. Carolina has dropped their last six games versus the Steelers, Lions, Seahawks, Bucs, Browns and Saints.

In the Saints game, Carolina QB Cam Newton put up 131 yards with a pick, and Christian McCaffrey managed 53 yards on 15 rushes. The Panthers’ top receiver was McCaffrey as well on 67 yards from 8 catches.

The Falcons weren’t able to put up more than 20 points during their five-game losing streak, so it’s a minor victory to hang 40 on Arizona—even if the Cardinals are a terrible football team.

Carolina has been something of a mixed bag this season, but they’ve got the personnel to be competitive against just about anyone. I’m going to stick with the Panthers here.