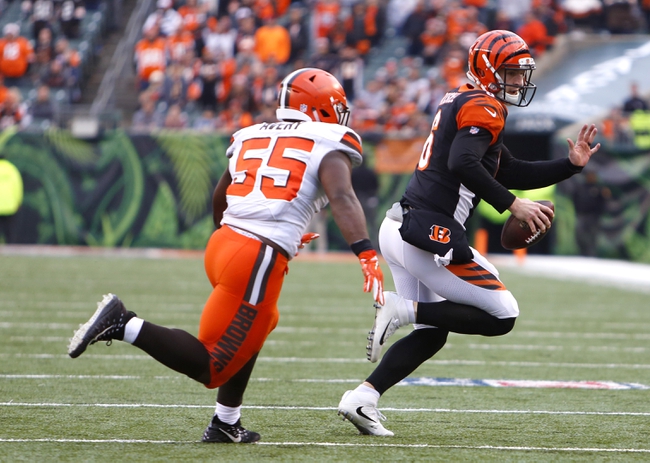 The Cincinnati Bengals and the Cleveland Browns meet in a week 16 AFC North division tilt in NFL action from FirstEnergy Stadium on Sunday afternoon.

The Cincinnati Bengals come into this game looking to play spoiler after officially being eliminated from playoff contention despite a 30-16 win over Oakland in their last outing. Jeff Driskel has thrown for 775 yards, 4 touchdowns and 2 interceptions while Joe Mixon has rushed for 995 yards and 8 touchdowns this season. Tyler Boyd leads Cincinnati’s receiving corps with 76 catches for 1,028 yards and 7 touchdowns but could miss the remainder of the season with an MCL sprain and are already without A.J. Green due to injury as well. Defensively, Geno Atkins leads the Bengals with 10 sacks while Carlos Dunlap has 8 sacks and Shawn Williams leads Cincinnati with 68 tackles this season. As a team, Cincinnati is averaging 326.2 yards of total offense and 24.1 points per game this season.

The Cleveland Browns will look for another win to keep their slim playoff hopes alive following a 17-16 win over Denver in their last outing. Baker Mayfield has thrown for 3,065 yards, 21 touchdowns and 11 interceptions while Nick Chubb has rushed for 860 yards and 8 touchdowns this season. Jarvis Landry leads Cleveland with 72 catches for 827 yards while Antonio Callaway has 507 receiving yards with 4 touchdowns and David Njoku has 50 grabs for 504 yards and 3 TDs. Defensively, Myles Garrett leads the Browns with 12.5 sacks while Damarious Randall has 4 interceptions and a team-high 68 tackles this season. As a team, Cleveland is averaging 355.8 yards of total offense and 22.1 points per game this season.

A win over the Raiders doesn’t give me much confidence for the Bengals here, as the team is out of the playoffs and will most likely be without their top two receivers for this game. Cleveland’s playoff hopes are slim, but there’s no denying that the Browns are full of confidence right now after winning 4 of their last 5 games and should have enough in the tank to get the win here so I’ll lay the points with Cleveland as I just can’t trust Cincinnati in their current form, even though the Bengals have had a lot of success ATS in this matchup.