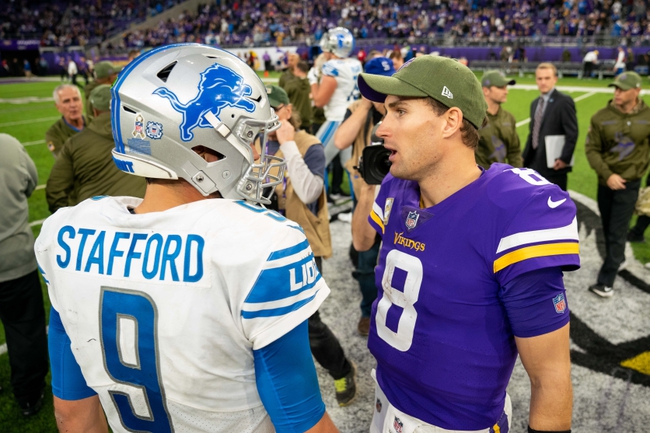 The Detroit Lions look to play spoiler at this point after losing six of their last eight games. The Detroit Lions have split their last six home games. Matthew Stafford is completing 67 percent of his passes for 3,395 yards, 19 touchdowns and 11 interceptions. Stafford has three or more touchdown passes in seven of his last 13 games. Kenny Golladay and Marvin Jones Jr. have combined for 1,513 receiving yards and 10 touchdowns while Theo Riddick has 57 receptions. The Detroit Lions ground game is averaging 103.1 yards per contest, and Kerryon Johnson leads the way with 641 yards and three touchdowns. Defensively, Detroit is allowing 23.8 points and 346.1 yards per game. Jarrad Davis leads the Detroit Lions with 88 tackles, Devon Kennard has seven sacks and Darius Slay has three interceptions.

The Minnesota Vikings looked good in their first game without OC John DeFilippo, as they scored 41 points in a win over the Miami Dolphins, the exact point total they produced in their previous three games. The Detroit Lions have been held to 20 or less points in seven of their last eight games and have nothing to play for other than this being their last home game of the year and wanting to send the fans out with a win while preventing the Vikings from making the playoffs. The Minnesota Vikings are 8-3-1 ATS in their last 12 games when a favorite of at least four points. The Detroit Lions have failed to cover seven of their last 10 games when an underdog of at least four points. The Lions have shown very little to hold onto these last couple of months, as the offense can't produce, and it puts the defense in constant bad situations. While a win over the Dolphins doens't prove the Vikings are back, they did look like a reenergized team on both sides of the ball. Assuming those Vikings show up, this should be a comfortable victory for the road team.