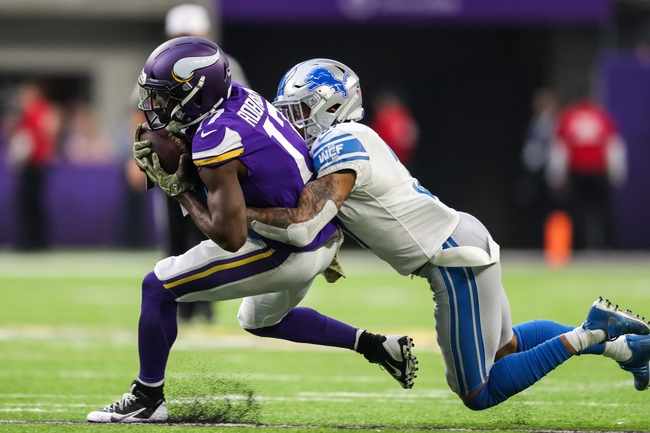 The Minnesota Vikings and the Detroit Lions meet in a week 16 NFC North division tilt in NFL action from Ford Field on Sunday afternoon.

The Minnesota Vikings will look to keep their playoff hopes alive after a 41-17 win over Miami in their last outing. Kirk Cousins has thrown for 3,913 yards, 26 touchdowns and 10 interceptions on 70.5% passing while the tandem of Latavius Murray and Dalvin Cook have combined for 1,041 yards and 8 touchdowns this season. Adam Thielen leads the Vikes with 105 catches for 1,255 yards and 9 touchdowns while Stefon Diggs has added 92 catches for 964 yards and 7 TDs. Defensively, Danielle leads the Vikings and is tied for 2nd in the NFL with 14.5 sacks while Eric Kendricks leads Minnesota in tackles with 62 tackles this season. As a team, Minnesota is averaging 358.9 yards of total offense and 23.1 points per game this season.

The Detroit Lions will look to play spoiler after being officially eliminated from playoff contention thanks to a 14-13 loss to Buffalo in their last outing. Matt Stafford has thrown for 3,395 yards, 19 touchdowns and 11 interceptions on 67% passing while Kerryon Johnson leads the Lions in rushing with 641 yards along with 3 touchdowns while LeGarrette Blount has 374 rushing yards and a team-high 5 TDs this season. Kenny Golladay leads Detroit’s receiving corps with 64 catches for 1,005 yards and 5 touchdowns. Defensively, Devon Kennard leads Detroit with 7 sacks while Romeo Okwara has 6.5 sacks and Jarrad Davis has 5 sacks along with a team-high 65 tackles this season. As a team, Detroit is averaging 329.4 yards of total offense and 20.3 points per game this season.

Being eliminated from the playoffs was the final nail in the proverbial coffin for me when it comes to Detroit, but I had lost faith in the Lions long before they were eliminated. As good of a QB as Matt Stafford is, the Lions just couldn’t find a way to put points on the board, scoring 17 or less in each of their last 4 games and in 6 of their last 8, including a season-low 9 points to these same Vikings a month and a half ago. The Vikings are the team with something to play for in this game, as Minnesota is holding onto the 2nd wild card spot by a thread and need to keep winning to maintain their hold on that spot. The Vikings have also had a lot of success ATS in Detroit, so I’ll lay the points with the Vikings in this one.