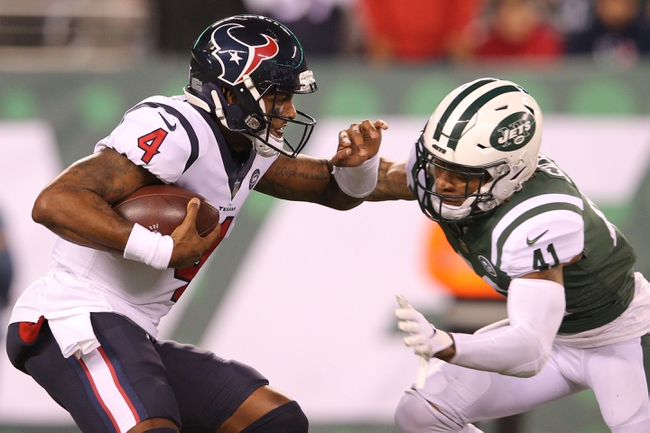 The Houston Texans and the Philadelphia Eagles meet in week 16 NFL action from Lincoln Financial Field on Sunday afternoon.

The Houston Texans come into this game looking to get closer to a first-round bye after improving to 10-4 with a 29-22 win over the New York Jets in their last outing. Deshaun Watson has thrown for 3,592 yards, 24 touchdowns and 9 interceptions on 67.7% passing while Lamar Miller leads Houston in rushing with 917 yards and 4 touchdowns and Alfred Blue had 473 rushing yards. DeAndre Hopkins leads the Texans’ receiving corps with 94 catches for 1,321 yards and 11 touchdowns this season. Defensively, J.J. Watt leads Houston with 14.5 sacks while Justin Reid has 3 interceptions and Tyrann Mathieu leads Houston with 66 tackles while Kareem Jackson is right behind with 65 tackles this season. As a team, Houston is averaging 363.5 yards of total offense and 25.1 points per game this season.

The Philadelphia Eagles will look to keep their playoff hopes alive after improving to 7-7 with a 30-23 win over Los Angeles in their last outing. Nick Foles has tallied 721 yards, a touchdown and 2 picks in relief of Carson Wentz who will be missing this game due to injury. Josh Adams leads the Eagles with 440 rushing yards while Zach Ertz leads the Eagles’ receiving corps with 101 grabs for 1,038 yards and 6 touchdowns. Alshon Jeffery has 57 receptions for 702 yards and 5 scores while Nelson Agholor has 54 catches for 580 yards this season. Defensively, Michael Bennett leads Philly with 8 sacks and Fletcher Cox has 7.5 sacks while Malcolm Jenkins leads the Eagles with 71 tackles this season. As a team, Philadelphia is averaging 354.7 yards of total offense and 22.2 points per game this season.

I went all out against the Eagles last week and boy did that blow up in my face, as the Eagles not only covered, but won outright as 11-point underdogs. The Eagles are in must-win mode right now so they could very well pick up another win here, however I’m going to go against the grain and side with Houston. The Texans have a first round bye in their sights after New England fell to Pittsburgh, and you could definitely argue that the Texans are one of, if not THE toughest defense that Philadelphia has faced this season. The Eagles seem to rally behind Foles, but in a near pick ‘em scenario, I can’t go against the more complete football team, and to me, in this game, that’s Houston, so I’ll take the free point in a game I see the Texans winning by a touchdown.