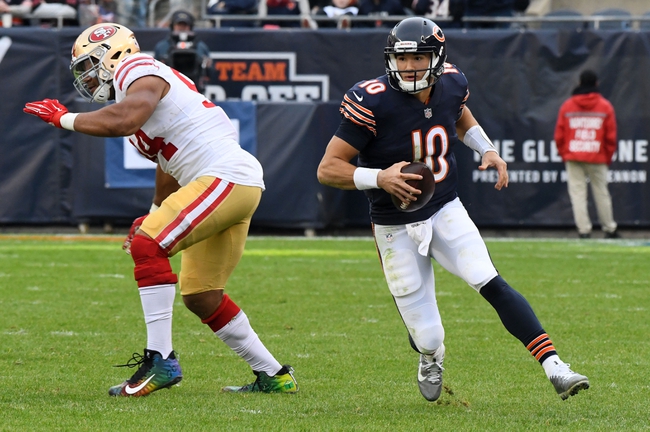 The Chicago Bears and the San Francisco 49ers meet in week 16 NFL action from Levi’s Stadium on Sunday afternoon.

The Chicago Bears come into this game looking to potentially push their way into a first-round bye after clinching their first NFC North division title since 2010 with a 24-17 win over Green Bay in their last outing. Mitch Trubisky has thrown for 2,814 yards, 23 touchdowns and 12 interceptions on 64.9% passing while Jordan Howard leads the Bears in rushing with 773 rushing yards and 6 touchdowns this season. Tarik Cohen leads Chicago in receiving with 68 catches for 710 yards and 5 touchdowns while Allen Robinson II has 49 grabs for 669 yards and 4 scores and Taylor Gabriel has 60 catches for 599 yards. Trey Burton and Anthony Miller each have 6 receiving TDs as well this season for the Bears. Defensively, Khalil Mack leads Chicago with 12.5 sacks while Roquan Smith leads the Bears with 80 tackles this season. As a team, Chicago is averaging 345.9 yards of total offense and 27.4 points per game this season. The Bears are also one of the NFL’s toughest defensive units, sitting 3rd in the league with 310.9 yards of total offense against per game and 18.9 points against per game and 2nd in terms of stopping the run, allowing just 83.6 rushing yards per game this season.

A low line against San Francisco at home is how I got burned last week, as I sided with Seattle and the 49ers won outright. The 49ers are also dangerous in the regard that they have nothing to lose and that all 4 of their wins and 3 covers ATS have come at home this season. However, the Bears still have a lot to play for even after clinching their division as one slip-up from the Rams could give Chicago a first-round bye if the Bears win out given that the Bears hold a tiebreaker over Los Angeles. Every win hurts the 49ers’ draft position and given that Chicago is a much tougher task defensively than Seattle, I’ll lay the points with the Bears here.