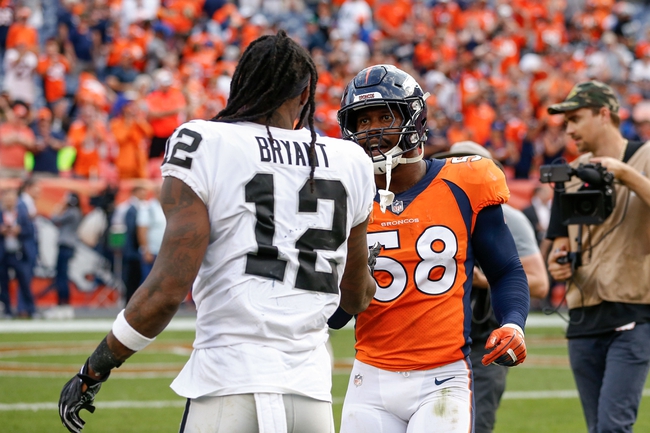 The Denver Broncos and Oakland Raiders meet Monday in NFL action at the Oakland Coliseum.

The Denver Broncos could use a feel good victory here after splitting their last eight games. The Denver Broncos have split their last six road games. Case Keenum is completing 62.1 percent of his passes for 3,396 yards, 15 touchdowns and 12 interceptions. Keenum has one or less touchdown passes in nine of his last 13 games. Emmanuel Sanders and Courtland Sutton have combined for 1,482 receiving yards and seven touchdowns while Jeff Heuerman has 31 receptions. The Denver Broncos ground game is averaging 123.2 yards per contest, and Phillip Lindsay leads the way with 991 yards and nine touchdowns. Defensively, Denver is allowing 21.4 points and 378.1 yards per game. Todd Davis leads the Denver Broncos with 104 tackles, Von Miller has 14.5 sacks and Chris Harris Jr. has three interceptions.

The Oakland Raiders have a chance to play spoiler after losing eight of their last 10 games. The Oakland Raiders have lost four of their last six home games. Derek Carr is completing 68.4 percent of his passes for 3,697 yards, 19 touchdowns and eight interceptions. Carr has one or less touchdown passes in nine of his last 14 games. Jared Cook and Jordy Nelson have combined for 1,434 receiving yards and nine touchdowns while Jalen Richard has 62 receptions. The Oakland Raiders ground game is averaging 99.1 yards per contest, and Doug Martin leads the way with 516 yards and three touchdowns. Defensively, Oakland is allowing 29.9 points and 385.2 yards per game. Tahir Whitehead leads the Oakland Raiders with 108 tackles, Maurice Hurst has four sacks and Gareon Conley has two interceptions.

The Denver Broncos are pretty much out of the playoff race at this point after brutal losses to the 49ers and Browns, so you have to question their motivation at this point. The Oakland Raiders have been a mess both on and off the field this season, but their last two home games resulted in a win over the Steelers and just a seven-point loss to the Kansas City Chiefs. The Denver Broncos are 2-5-1 ATS in their last eight games when a favorite of at least three points. The Oakland Raiders have failed to cover nine of their last 13 games when an underdog of at least three points. The Broncos don't have much to play for at this point and you have to wonder how excited they are to be playing on the road in a meaningless game on Christmas Eve. The Oakland Raiders usually have a good home crowd and have shown signs of life at home this season. The home team has also won each of the last five meetings between the Broncos and Raiders. I don't love it, but I'll take my free field goal if forced to pick this contest...