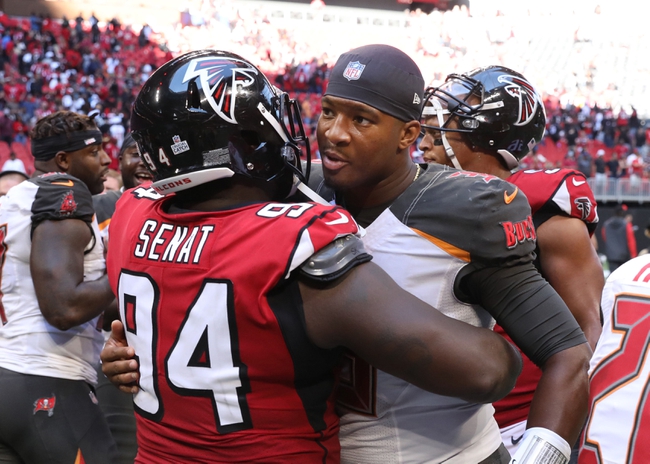 The Atlanta Falcons look for a victory to end the season on a three-game winning streak. The Atlanta Falcons have lost five of their last seven road games. Matt Ryan is completing 69.3 percent of his passes for 4,546 yards, 33 touchdowns and six interceptions. Ryan has two or more touchdown passes in seven of his last 10 games. Julio Jones and Calvin Ridley have combined for 2,328 receiving yards and 16 touchdowns while Mohamed Sanu has 59 receptions. The Atlanta Falcons ground game is averaging 90.7 yards per contest, and Tevin Coleman leads the way with 755 yards and three touchdowns. Defensively, Atlanta is allowing 26.1 points and 381.3 yards per game. De'Vondre Campbell leads the Atlanta Falcons with 85 tackles, Grady Jarrett has six sacks and Damontae Kazee has six interceptions.

The Atlanta Falcons haven't had the best season in the world, but they have won two straight and their last three wins have come by an average of 21.3 points. The Tampa Bay Buccaneers continue to lose tight, frustrating games, and a lot of it has to do with turnovers and shooting themselves in the foot constantly. The Atlanta Falcons have failed to cover six of their last nine games as a favorite of any kind. The Tampa Bay Buccaneers are 4-4-2 ATS in their last 10 games as an underdog of any kind. The Atlanta Falcons have won each of the last four meetings against the Tampa Bay Buccaneers and six of the last nine meetings. I considered the Bucs and the free points due to them being at home in this meaningless game and winning in Tampa Bay can be tougher than some think. However, the Buccaneers have burned us a lot this year due to sloppy play and the comedy of errors seem like they never stop. I'll take the Falcons simply due to them being easier to trust.