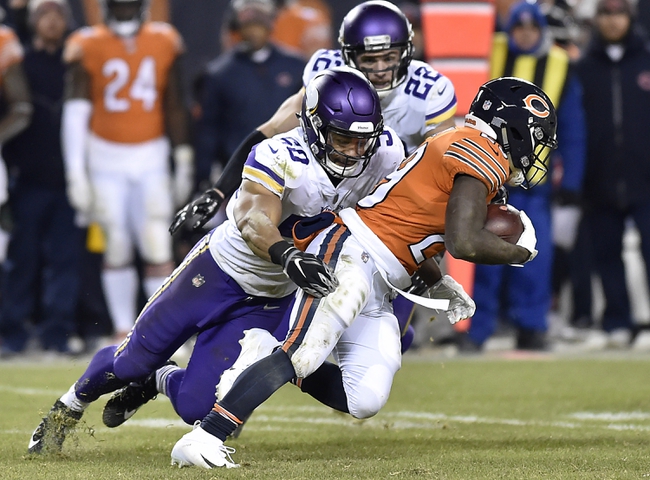 The Chicago Bears and the Minnesota Vikings meet in a pivotal week 17 NFC North division matchup from U.S. Bank Stadium on Sunday afternoon.

The Chicago Bears will look to stay hot after winning 3 straight and 8 of their last 9 following a 14-9 road win over San Francisco in their last outing. Mitch Trubisky has thrown for 3,060 yards, 24 touchdowns and 12 interceptions on 66.4% passing while Jordan Howard has rushed for 826 yards and 7 touchdowns this season. Allen Robinson II leads the Bears with 754 receiving yards along with 4 touchdowns while Tarik Cohen leads Chicago with 69 catches for 717 yards and 5 touchdowns and Taylor Gabriel has 63 receptions for 627 yards. Defensively, Khalil Mack leads the Bears with 12.5 sacks and Akiem Hicks has 6 sacks of his own while Roquan Smith has 5 sacks and a team-high 85 tackles this season. As a team, Chicago is averaging 344.7 yards of total offense and 26.5 points per game this season. The Bears are also tough defensively, sitting top-8 in the NFL in total yardage against (308.7 YPG/4thin NFL), passing yards against (227.6 YPG/8th), rushing yards against (81.1 YPG/2nd) and scoring defense (18.2 PPG/3rd) this season.

The Minnesota Vikings will look for a win to secure a playoff spot after back-to-back wins after a 27-9 win over Detroit last time out. Kirk Cousins has thrown for 4,166 yards, 29 touchdowns and 10 interceptions on 70.7% passing while Dalvin Cook and Latavius Murray have combined for 1,136 yards and 8 touchdowns this season. Adam Thielen leads the Vikings with 110 catches for 1,335 yards and 9 touchdowns while Stefon Diggs has 94 grabs for 974 yards and 8 touchdowns this year. Defensively, Danielle Hunter leads the Vikings with 14.5 sacks while Eric Kendricks leads Minnesota with 63 tackles this season. As a team, Minnesota is averaging 357.7 yards of total offense and 23.3 points per game this season. The Vikings are also a tough nut to crack on defense, giving up just 308.2 yards of total offense (3rdin NFL) and 198.5 passing yards per game (3rdin NFL) along with 21.1 points per game this season (7thin NFL).

I can understand why Minnesota is the favorite here, being at home and it’s basically win and you’re in for the Vikings. However, the Bears still have something to play for as well, as Chicago can get a first round bye if the 49ers manage to upset the Los Angeles Rams. The Bears are also the better team here in my opinion and are more than capable of keeping this one within a field goal if not winning it outright on the road, so I’ll take a shot with the Bears and the points in this one.